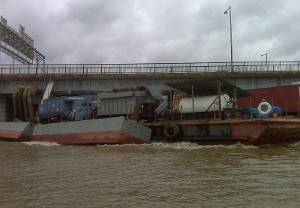 The Coast Guard is investigating an allision caused by flood conditions between an 80-ft construction barge and the 14th Street Bridge in Washington, D.C, around March 15. A 25-ft Response Boat-Small crew from Coast Guard Station Washington, D.C., along with boatcrews from D.C., Police Department and D.C., Fire Department were dispatched to the scene. Upon arrival, the Coast Guard conducted an initial assessment and found no apparent significant damage to the bridge or the barge. The Coast Guard is working with the barge owners in an effort to remove the barge. There were no reports of injury or pollution. The bridge is operational as vehicular and waterway traffic were not affected by the allision.