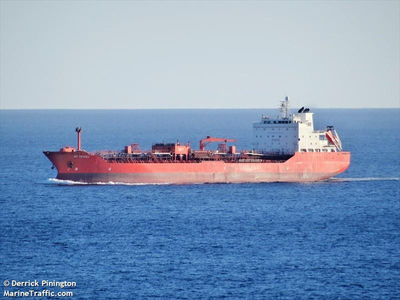 A Hong Kong-flagged tanker was briefly detained in Iran before being freed after armed Iranian guards in speedboats directed the vessel into its waters while it was sailing through the Gulf of Oman, maritime security sources said on Wednesday.

The sources said the SC Taipei chemical tanker had been sailing in international waters on Tuesday when it was stopped.

"The vessel's crew were ordered to lower the ladder and were then boarded. The vessel was later directed to Kooh Mobarak, Iran, but quickly released with crew and vessel now confirmed safe."

Two other maritime security sources also said the vessel had been briefly detained in Iran before being allowed to sail.

The International Maritime Security Construct (IMSC), a Britain-led naval coalition in the Gulf, said on Wednesday a Hong Kong flagged tanker was boarded "by armed men" and sailed into Iranian waters before being released, without saying who the armed men were.

IMSC said it did not receive a distress call from the vessel and "assessed no immediate threat to the free flow of shipping in the area".

The Bahrain-based IMSC was formed late last year in response to a series of attacks on oil tankers.

In one of those incidents, Iran's elite Revolutionary Guards Corps (IRGC) detained a Swedish-owned tanker which was held for weeks in Iran. Britain had earlier detained an Iranian tanker off the territory of Gibraltar.

Iranian and Hong Kong officials could not be immediately reached for comment. The SC Taipei's Singapore-based manager SC Shipping was also not immediately available.

The vessel's last position on Wednesday was at anchor near the United Arab Emirates with the UAE port of Fujairah listed as its destination, Refinitiv ship tracking data showed.

The United Kingdom Maritime Trade Operations (UKMTO) said on Tuesday that armed men had boarded an unidentified vessel at anchor in the Gulf of Oman but the ship was later released.

The UKMTO said on Wednesday that Tuesday's episode was "assessed to be an isolated incident of state-based intervention, with no wider threat to maritime shipping in the region".

Ambrey Intelligence said the IRGC had stepped up activity in recent weeks throughout the Strait of Hormuz, hailing ships via VHF radio systems and conducting brief interdictions. It added that such activity should be viewed in the context of "domestic pressures related to sanctions".

The United States re-imposed tough sanctions on Iran in 2018 after Washington pulled out of a 2015 nuclear deal with Tehran.