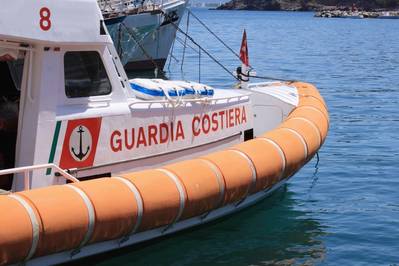 An Italian charity ship was escorted into the port of Lampedusa by police on Tuesday after rescuing 49 Africans in the Mediterranean, with Interior Minister Matteo Salvini calling for the crew to be arrested.

A judicial source said a magistrate had ordered that the boat, the Mare Jonio, be seized as an investigation is launched into allegations of aiding and abetting human trafficking.

The vessel picked up the migrants, including 12 minors, on Monday after their rubber boat started to sink in the central Mediterranean, some 42 miles (68 km) off the coast of Libya.

The humanitarian ship immediately set sail for the nearby Italian island of Lampedusa, defying Salvini, the leader of the hard-right League party who has ordered the closure of all ports to boats carrying rescued migrants.

After initially being prevented from docking, the Mare Jonio was unexpectedly accompanied into port by police at nightfall as a storm approached.

The judicial source said the migrants would be allowed to disembark, while the boat would be impounded and the crew faced possible questioning.

"Excellent," Salvini wrote on Twitter. "We now have in Italy a government that defends the borders and enforces the law, especially against human traffickers. Those who make mistakes pay the price," he said.

The government has repeatedly accused charity rescue boats of being complicit with people smugglers, who charge large sums to help migrants get to Europe. The NGOs deny the accusation.

There was no immediate comment from the collective that organised Monday's sea operation, "Mediterranea". It said in an earlier statement that the rescue had been carried out in accordance with international human rights and maritime law.

ARRIVALS FALL
New arrivals to Italy have plummeted since Salvini took office last June, with just 348 migrants coming so far this year, according to official data, down 94 percent on the same period in 2018 and down 98 percent on 2017.

His closed-port policy has helped support for his League party double since March 2018 elections. However, humanitarian groups say his actions have driven up deaths at sea and left migrants languishing in overcrowded Libyan detention centres.

Salvini said on Monday the Mare Jonio should have let the Libyan coastguard pick up the migrants. Failing that, it should have taken them either to Libya or Tunisia rather than disobey initial orders not to enter Italian waters.

"If a citizen forces a police roadblock they are arrested. I trust the same thing will happen here," Salvini said.

Mediterranea said its rescue operation had saved the migrants either from drowning or from being picked up by the Libyans and "taken back to suffer again the torture and horror from which they were fleeing".

Last August, Salvini blocked an Italian coastguard ship with 150 migrants aboard for almost a week before finally letting it dock. Magistrates subsequently put him under investigation for abuse of power and kidnapping and have asked parliament to strip him of his immunity from prosecution.

The upper house Senate is due to vote on that on Wednesday, but the request looks certain to be rejected, with Salvini arguing that he acted in the national interest.