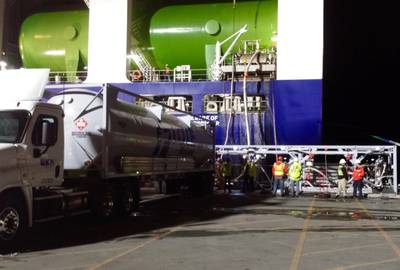 The LNG was transferred from the ISO tank containers using a specially developed transfer skid developed by TOTE’s partner Applied Cryogenics Technologies (ACT) of Houston, Texas.  The transfer skid is designed to allow four ISO tanks to be transferred to Isla Bella at once, dramatically reducing transfer time.

Oversight of the operation both at shipside and on shore was provided by TOTE Services, Inc. (TSI), TOTE Maritime’s sister company that manages the vessels.

“We are very pleased with the results of this initial LNG bunker event and know that the use of LNG in our Marlin Class vessels will provide unprecedented environmental benefits both here in Jacksonville and in Puerto Rico,” said Tim Nolan, President of TOTE Maritime Puerto Rico. “We are indebted to USCG Sector Jacksonville for their diligent oversight and assistance that was invaluable and helped make this event a success.  Our partners ACT, Pivotal LNG and Genox were also major components of our success.  Our sister company, TSI, has developed significant expertise in LNG as a Maritime fuel and ensures that our vessels operate safely and efficiently using this environmentally superior fuel.”

Applied Cryo Technologies, Inc. (ACT) is the premier equipment supplier for cryogenics in North America. ACT is proud to be the first to market with this type of bunkering equipment for the marine industry.  Leveraging ACT’s innovative style and unrivaled experience in LNG equipment is sure to bring success to any LNG fueling project.