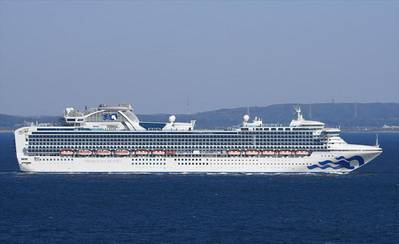 A Japanese infectious disease specialist has castigated his government's handling of quarantine on a coronavirus-stricken cruise ship, saying it was run by "bureaucrats" who stoked the crisis by failing to follow basic protocols.

Kentaro Iwata of Kobe University Hospital took his criticism to YouTube after he spent a day as a volunteer doctor on the Diamond Princess. The luxury liner has become an incubator for the novel coronavirus, with more than 600 people now infected.

The ship docked in Yokohama on Feb. 3. Japan has been criticized for its handling of the quarantine, including by the U.S. Centers for Disease Control and Prevention (CDC).

But Iwata's criticism is some of the most scathing yet.

His English and Japanese language videos criticizing what he saw inside have been seen more than 1 million times and forced a response from the government.

When asked about the videos and the criticism, the government's top spokesman, Yoshihide Suga, said staff on the boat were thoroughly protected from infection through the use of masks and hand washing. The government has repeatedly defended its measures as appropriate.

Iwata said in the videos that he volunteered to help out in the quarantine but was taken aback at what he saw inside. Against protocols that he'd followed in fighting Ebola, SARS, and cholera, there was no distinction between a green zone, which is free of infection, and a red zone, which is potentially contaminated by virus, he said.

He relayed his concerns to officials on the boat and was later told to leave the site, he said.

Iwata told Reuters that he could face professional repercussions for his public rebuke of the government. He said he posted the videos at the urging of his wife, who is also an infectious disease specialist and said it was his professional duty to get the word out.

"You don't want to hide the chaotic problem and risk to lots of people," Iwata said. "You have to really do something about it."