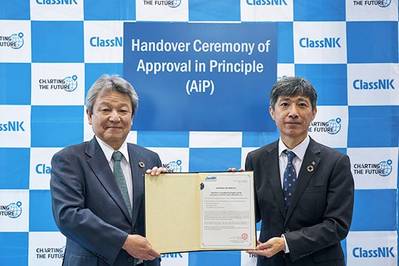 Hydrogen is expected to be used as a clean energy source to realize a decarbonized society as its burning does not emit CO2. To contribute to the maritime transportation of hydrogen and usage for marine fuel, which is anticipated to expand its use worldwide, ClassNK has worked on the establishment of necessary standards and certification.

In addition to class registration of the world’s first liquefied hydrogen carrier, the 1,250m3 carrying capacity Suiso Frontier built by Kawasaki in line with its rules and guidelines, ClassNK has issued an AIP for the design of the Cargo Containment System (CCS) with a capacity of 40,000 m3 class per tank developed by the said company in 2021 for use on a large liquefied hydrogen carrier.

Further to this AIP for CCS, ClassNK has issued AIPs for Cargo Handling Systems (CHS), which are key design elements of the vessel, and dual-fuel main boilers that use hydrogen boil-off gas as fuel, respectively.

ClassNK said it also examined the integrated design of a 160,000m3 large liquefied hydrogen carrier equipped with four of the above-mentioned cargo containment systems and issued an AIP to confirm its feasibility as a ship. Based on those three AIPs for CCS, CHS and dual-fuel main boilers issued already and the verification of the ship arrangement, hull structure/ stability, power generation/ distribution system, and the comprehensive hydrogen fire protection and extinction philosophy, it is confirmed that large-scale hydrogen transportation with this design is possible to realize, according to the class society.

In the examination, ClassNK carried out the design review of the liquefied hydrogen carrier based on its Part N of Rules for the Survey and Construction of Steel Ships incorporating the IGC Code, and its Guidelines for Liquefied Hydrogen Carriers incorporating the IMO’s interim recommendations for Carriage of Liquefied Hydrogen in Bulk. In addition, a comprehensive safety assessment was conducted based on the HAZID risk assessment results, which has led to the issuance of the AIP.