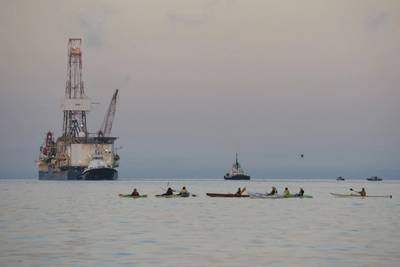 Noble Discoverer transits Puget Sound after its departure from the Port of Everett, Wash., June 30. Noble Discoverer was the last of three oil drilling and support vessels to depart western Washington for the Arctic this summer. (USCG photo by Amanda Norcross)

Environmental activists in the U.S. prepare to take their so-called “kayaktivism” nationwide as they urge lawmakers to revoke oil and gas exploration leases in the Chukchi Sea, says environmental group Friends of the Earth.

The group’s “Shell No” day on July 18 will gather activists in 13 states and in Washington D.C. as they bring their message to President Obama’s doorstep by staging an Arctic marine scene in Lafayette Park to protest Shell and other companies drilling in the Arctic Ocean.

Following on the action of “kayaktivists” who floated in Seattle earlier this year to protest Shell’s Polar Pioneer rig, Friends of the Earth says the protest’s visuals will include kayaks and inflatable boats, many representations of water, activists with signs and the White House backdrop.

Environmentalists say oil exploration and production in the challenging Arctic region holds large potential for disaster, adding a spill in the region would be extremely difficult to clean up.

Shell has not drilled in the Arctic since a rig it was leasing broke free and grounded in 2012.

It is estimated that the company has spent about $7 billion on Arctic drilling without producing any oil in the region.