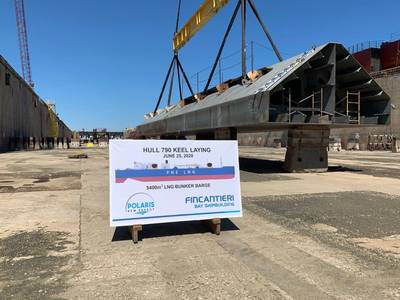 The barge will be named the Clean Canaveral and will operate as an articulated tug and barge unit (ATB) that initially runs along the U.S. East Coast providing LNG bunkering solutions to NorthStar Midstream’s customers.

Modern ships are now largely built in a series of prefabricated, complete hull sections rather than being built around a single keel. The event recognized the keel laying as the setting of the first modular components.

After several months of prefabrication work of its modular sections by Fincantieri Bay Shipbuilding’s team, the 55-ton modules were set into place in the Sturgeon Bay, Wis. shipyard.

Slated for completion in late 2021, the vessel will be 340 feet long overall, with a 66 foot beam and a depth of 32 feet, 10 inches. The 5,400-cubic-meter capacity barge will be fitted with four 1,350-cubic-meter IMO Type C tanks. It will be ABS classed and utilize a cargo handling system designed and developed by Wärtsilä Gas Solutions.