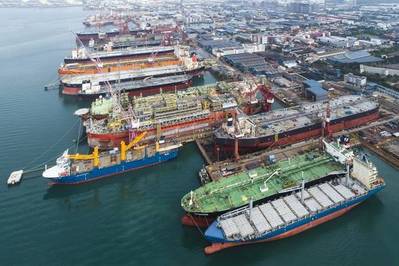 Temasek-backed Singapore conglomerate Keppel Corp and smaller rival Sembcorp Marine are exploring a potential tie-up which would see them combine their struggling offshore and marine (O&M) businesses after years of losses in an industry downturn.

A successful deal would see Keppel spin off the new business into a listed entity and ultimately exit from the legacy business. Temasek would become the largest shareholder in the combined unit, while Sembcorp will also own a stake in it.

Keppel's O&M unit, which ranks as one of world's largest offshore oil rig builders, and Sembcorp have been whiplashed by oversupply in the sector, sustained weakness in oil prices and a drop in new orders over the many years.

"The objective of these discussions is to create a stronger combined entity and sustainable value over the long term for Keppel O&M and Sembcorp Marine and their respective stakeholders, in response to dramatic changes in the global offshore and marine engineering and energy sectors," the companies said in a joint statement on Thursday.

Earlier, Reuters cited sources as saying the companies, which both count Singapore state investor Temasek Holdings as their largest shareholder, were set to begin talks to explore combining their O&M businesses.

Keppel and Sembcorp said they will "undertake mutual due diligence and discuss the terms of the potential combination, which is expected to take several months."

If a deal proceeds, the combined entity will be a listed company, and Sembcorp's shareholders will hold shares in it. Keppel will receive shares in the combined unit and a cash consideration of up to S$500 million ($372 million).

Keppel said it plans to distribute to shareholders the combined entity shares that it will receive.

Keppel and Sembcorp own a network of shipyards in Singapore and overseas, including in Brazil, and employ thousands of workers.

Markets have been expecting a much-needed consolidation in the rig-building sector as companies in the shipbuilding and marine sectors in markets such as South Korea and China have already joined forces amid a weak sector outlook.

"Consolidation is needed simply because of competition, and the need for bigger working capital to take on new and bigger projects," said Joel Ng at KGI Securities.

Startree Investment Pte, a fully-owned subsidiary of Temasek has committed to subscribing up to 67% of the rights issue while DBS is underwriting the remainder, Sembcorp said.

The liquidity from the proposed rights issue will be "vital in fortifying our financial position," said Wong Weng Sun, president and CEO of Sembcorp. ($1 = 1.3445 Singapore dollars)