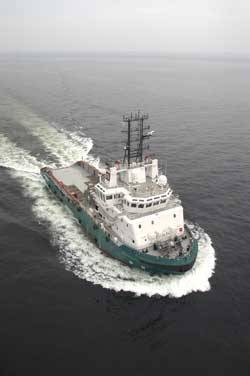 On October 31, at about 12:00 a.m., a number of armed men in 3 fly boats, boarded the Bourbon Sagitta, an Anchor Handling Tug Support vessel assisting loading operations of crude oil from a field off the Bakasi Peninsula (180 kms from Douala).

10 of the 15 crew members (2 Cameroonians, 1 Tunisian, 1 Senegalese and 6 French seamen) were kidnapped. No one was injured. The ship and the staff still on board are now safe.

An Emergency Unit was immediately put together by Bourbon who is working closely with the French Ministry of Foreign and European Affairs, the Tunisian and Senegalese authorities and the local Cameroonian authorities.

The Ministry of Foreign and European Affairs wishes to emphasize that the utmost discretion is necessary in order to achieve a satisfactory outcome to this affair.

Communiqué to the media by Eric Verrière, General Manager of Bourbon Offshore Surf, the Bourbon branch that manages the Bourbon Sagitta:

"Before giving you a recap of the situation I would like to start by saying that Bourbon’s priority is first and foremost to its staff members. Since the first alert during the night, the company has been mobilized and working to obtain a rapid and successful outcome.

Let’s get back to the facts.

Early this morning, round about midnight local time we were alerted on an incident that had occurred in the petrol field exploited by Total situated 15 miles off the Bakassi peninsular in Cameroon.

A number of armed men, aboard 3 fly boats, boarded the Bourbon Sagitta.

The Bourbon Sagitta is a tug that anchors oil rigs. This vessel was assisting a crude oil loading operation.

10 of the 15 crew members present on board were kidnapped and are at present in the hands of the hostage takers.

Amongst the 10 hostages, all of whom are Bourbon employees, are 2 Cameroonians, 1 Tunisian, 1 Senegalese and 6 Frenchmen.

We remind you that the assailants were only on board for 15 minutes and that no member of the crew was wounded.

I also emphasize that the other crew members on board were able to continue to run the ship safely.

Late morning we sent 5 officers on board to assist the crew that were still aboard the ship. The anchoring operation was finished by the beginning of the afternoon. As I speak, the ship is sailing towards the Port of Douala where it will arrive tomorrow morning.

In accordance with security procedures of the group an emergency unit was immediately established in Douala in Cameroon, and here in Marseilles at the head office of Bourbon Offshore Surf.

Bourbon has contacted the various national authorities representing all the kidnapped sailors. Diplomatic moves at the highest level therefore include the representatives of all these countries.

The latest news we have is that the Cameroonian Bakassi Freedom Fighters group has claimed responsibility for the attack through a press agency. This claim is still being verified by the French Ministry of Foreign and European Affairs and we are therefore unable to give you any further information on this subject.

In view of the developments in this situation and the stakes at risk, the procedure now implies that it is managed by government bodies and that the countries involved liase directly with each other in order to manage in the best and most responsible way, the fate of the hostages, at the highest possible level, and disposing of the necessary diplomatic means.

The French Ministry of Foreign and European Affairs wishes to emphasize that the utmost discretion is necessary in order to achieve a satisfactory outcome to this affair.

Bourbon will disclose any new information when available and verified.

Bourbon is totally committed to contributing to a secure end to the hostage taking. We will also make it our business to obtain the best possible treatment and the liberation of our staff as quickly as possible."