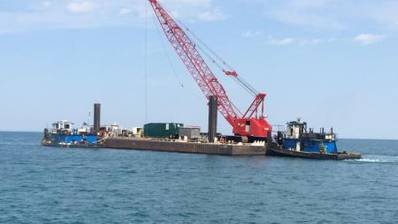 The vessel Kimberly Selvick (left), connected to a crane barge, is pushed by a tug through Lake Michigan after being salvaged from the shores of Lake Michigan near Burnham Park outside of Chicago, May 10, 2014. The Kimberly Selvick became partially submerged after taking on water May 5. (U.S. Coast Guard photo by Lt. Heidi Braglone)

U.S. Coast Guard (USCG) personnel and salvage and cleanup crews completed the salvage of the towing vessel Kimberly Selvick from near Burnham Park on the shores of Lake Michigan, Saturday, and it has been towed to Calumet River Slip, the USCG said in a press announcement.

The Kimberly Selvick became partially submerged Monday afternoon after it took on water trying to retrieve two barges that broke free during a tow.

The salvage company removed petroleum products from the vessel in a process known as lightering, Friday afternoon. Crews lightered the Kimberly Selvick’s forward fuel tank of 9,700 gallons of fuel.

At about 12:30 p.m., the vessel was floating and was secured to the crane barge on scene. The barge was shifted out to deeper water and divers entered the water to complete the hull assessment. The assessment revealed that the keel was split in two locations in the engine room area.

Salvage crews shingled the keel of the vessel and pumped the engine room free of water. They transited the barge and vessel through the Calumet River and moored at the Calumet River Slip, where it will remain until it can enter the drydock, Wednesday, for repairs.

The vessel will be monitored at all times until it is removed from the water.