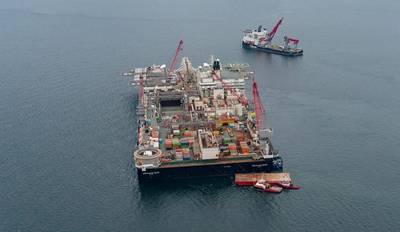 1000 km of the Nord Stream 2 pipeline has now been laid in the Baltic Sea in Finnish, Swedish and German waters.

Some twenty vessels are currently being engaged in the project in the Baltic Sea, with nearly 1,300 people working on board the pipelay, pipe supply and survey vessels.

Another milestone was also reached last week, when the project’s coating and logistics contractor Wasco completed concrete weight coating of its share of the steel pipes in its plant in Kotka, Finland, where approximately 101,000 steel pipes had been coated.

This corresponds to half of the pipes needed for the twin pipelines.

The twin pipeline system consists of two approximately 1,230-kilometres-long pipelines, each made up of some 100,000 pipe joints.

Nord Stream 2 is a planned pipeline through the Baltic Sea, which will transport natural gas over some 1,230 km from the world’s largest gas reserves in Russia via the most efficient route to consumers in Europe. Nord Stream 2 will largely follow the route and technical concept of the successful Nord Stream Pipeline.