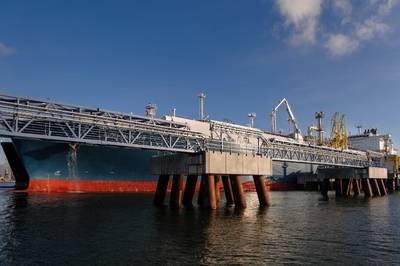 Capacities are allocated in advance, before the end of the gas year, according to the usual practice in the natural gas markets.

The Company performs the allocation of capacities according to the publicly announced Regulations for Use of Liquefied Natural Gas Terminal, which were verified and approved by the National Commission for Energy Control and Prices and the Board of the Company.

During the allocation procedure of the LNG terminal capacities the LNG regasification capacities and LNG reloading capacities shall be allocated.

The total volume of the LNG terminal capacity being allocated is 3.75 bcm per annum, which is equivalent to 6.5 mln m3 of LNG per annum applying a relative coefficient of expansion of 1:580.

On its website the Company constantly announces and updates the information regarding the unallocated capacities of the LNG terminal, which shall be available for acquisition during the Gas Year as well.