What is Known About the Drone Attack on Crimea? 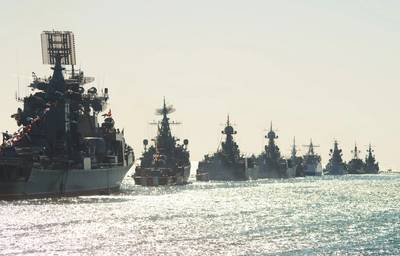 Russia suspended participation in the U.N.-brokered Black Sea grain deal after what it said was a Ukrainian drone attack on vessels in the Bay of Sevastopol in the early hours of Saturday. What do we know so far?

Russia said 16 air and maritime drones attacked civilian and Black Sea Fleet vessels in the Bay of Sevastopol in Crimea at 0420 Kyiv time on Saturday.

Reuters was unable to immediately verify battlefield accounts. Unverified footage on social media showed what appeared to be maritime drones speeding across the water towards a Russian battleship while bullets were fired at the drone.

WHO CARRIED OUT THE ATTACK?

Russia's defense ministry said the attack was carried out by Ukraine's 73rd Marine Special Operations Center under the guidance and leadership of British navy specialists in the town of Ochakiv on the Black Sea coast. It said that personnel from the same British navy unit, which it did not name, had blown up the Nord Stream pipelines last month. Britain denied the claim.

"To detract from their disastrous handling of the illegal invasion of Ukraine, the Russian Ministry of Defence is resorting to peddling false claims of an epic scale," a spokesperson for Britain's ministry of defense said.

"This latest invented story says more about the arguments going on inside the Russian Government than it does about the West." Ukraine has neither denied nor confirmed that it carried out the drone attack on Sevastopol and has instead suggested that Russia carried out the attack on itself so that it could suspend participation in the grain deal. Ukrainian President Volodymyr Zelenskiy's chief of staff, Andriy Yermak, said Russia had carried out "fictitious terrorist attacks on its own facilities".

Neither Russia nor Ukraine has provided evidence for their claims.

WHERE DID THE DRONES COME FROM?

Russia says it has recovered the wreckage of some of the maritime drones. It said it had investigated the memory of the Canadian-made navigation modules installed on the drones. The maritime drones, it said, were launched from the coast near Odesa and had moved along the grain corridor security zone before heading into the Bay of Sevastopol, the largest city on the Crimean peninsula that Russia annexed from Ukraine in 2014.

WHAT HAPPENS TO THE GRAIN DEAL?

Russia has been careful not to completely walk away from the deal.

"The Russian side cannot guarantee the safety of civilian dry cargo ships participating in the 'Black Sea initiative' and suspends its implementation from today on indefinite period," the Russian foreign ministry said on Oct. 29.