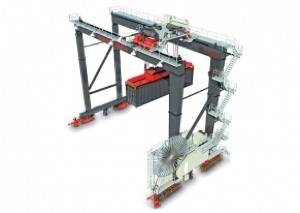 The company has received an order for twelve cranes for the new Khalifa Port where it has already delivered 30 automated stacking cranes. The port started its commercial operations in September this year.

Khalifa Port is owned by the Abu Dhabi Ports Company (ADPC) and operated by Abu Dhabi Terminals (ADT). Konecranes new order includes cranes with a lifting capacity of 40 tons, and they are equipped with automation controls.

"Our growing list of automation references speaks for itself. With each delivery, we gain strength and expertise," says Jussi Suhonen, General Manager, RMG Cranes, Konecranes.

Konecranes servers a broad range of customers, including manufacturing and process industries, shipyards, ports and terminals. The Group has 11,700 employees at 609 locations in 47 countries.

The provider of maritime construction services Jan De Nul said that a new lock complex along the Lys river in Harelbeke,…