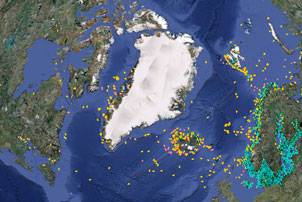 Norway’s AISSat-1 Satellite recently started its mission with a payload developed by Kongsberg Seatex AS. The AISSat-1 was launched successfully from India on July 12, and has already begun transmitting AIS messages from space to earth via Kongsberg Satellite Services' ground station at Svalbard.

AISSat-1 is an experimental satellite, equipped with a Kongsberg Seatex payload that receives and forwards AIS messages from ships. Using the technology in a fully developed system will improve safety at sea for vessels in Norwegian waters. It will make it easier to identify and coordinate vessels in search and rescue operations as well as assist and monitor the transport of dangerous goods and cargo in the high north.

AISSat-1 is equipped with technology developed and built in cooperation between the Norwegian Defence Research Establishment, Kongsberg Seatex, the Norwegian Coastal Administration and the Norwegian Space Centre. It is financed by the Norwegian Ministry of Trade and Industry. Kongsberg Satellite Services' ground station at Svalbard is used for communication.

AISSat-1 was launched in an Indian PSLV rocket from Sriharikota in India 12 July 03:52 UTC. The satellite is placed in a polar orbit with an altitude of approximately 635 kilometres. The satellite is of nano type, and measures 20 x 20 x 20 cm. It weighs six kilograms and is shaped like a cube.

Automatic Identification System (AIS) is required to be carried on all seagoing vessels of 300 gross tons or more and all passenger vessels. Its purpose is to assist the ship navigational watch to avoid collision with other vessels as well as to allow maritime authorities to track and monitor ship movements through operation of land based AIS stations.

The land stations can in general receive VHF signals from ships at a distance of up to 40 nautical miles off the coast. Norway is operating a chain of 39 land based stations along its coast, and most coastal states are operating or deploying such chains. The AISSat technology has the capability of substantially expanding the effective range of ship AIS position monitoring.