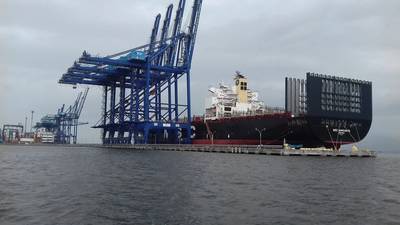 Brazil's Paranagua port authority said on Tuesday that landslides caused by heavy rainfall blocked road and rail access to the port, the second busiest for grain exports in the country.

In a statement, the authority said other port operations are normal as ships continue to unload and load products stored at the port's warehouses. Landslides have totally blocked the main access road to Parana's ports of Paranagua and Antonina, disrupting the flow of trucks headed to the coast, according to the statement.

The port authority said it is monitoring the situation, adding there is no timeline for clearing that road. At the port of Sao Francisco do Sul, which is located in Santa Catarina state, operations were halted due to heavy rains in Southern Brazil, a spokesperson said.

U.S.-based Bunge and a unit of Japan's Marubeni operate there. Meanwhile, Paranagua said a total of 400 trucks were expected in the 24 hours of Tuesday. As of 11:00 a.m. local time, 101 had completed the journey, with 40 standing by to unload.

Paranagua alone has storage capacity for 2 million tonnes of grains for export, the statement said.

Currently, 50% of that capacity is being used, the authority said. Citing Rumo RAIL3.SA, the company that operates a railway linking Curitiba to Paranagua, the authority confirmed it was also blocked in one section due to landslides and flooding of the tracks. Rumo will resume rail operations when water levels fall, Paranagua said.