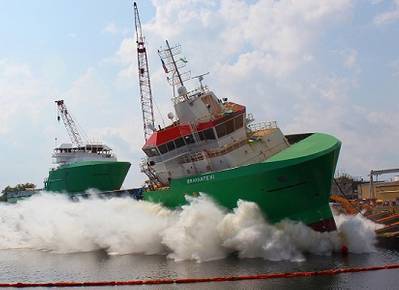 Eastern Shipbuilding Group, Inc. announced the christening and launching of the M/V Bravante VI for Boldini S.A., Bravante Group of Brazil. This is the second vessel in a series of five. The event was held on August 5, 2013 at Eastern’s Nelson Street Facility with hundreds of Eastern’s Employees and Guests.

Mr. Neves’s spouse Rubia had the honor of christening the vessel. Eastern’s President, Brian D’Isernia said a few words about the bright future of Shipbuilding here in the United States, providing more local jobs, his gratitude to Eastern’s skilled workers and the Offshore Marine Industry prior to the launch. The President of Bravante Group Renato Nascimento and U.S. Representative Steve Southerland both spoke about the journey taken to get to this great day along with the long term partnership between Bravante, Eastern and the U.S. Government. Father Roy Marien of Saint John’s Catholic Church located in Panama City, Florida performed the blessing of the vessel.

STX Canada Marine provided the design which is the basis for the very successful and proven Eastern Shipbuilding “Tiger Shark Class” series. Seven other Offshore Supply Vessels in this series have been delivered to Eastern’s clients and have already proven themselves in worldwide operations.

Eastern Shipbuilding Group is currently under contract constructing a total of nineteen Offshore Supply Vessels of similar size and complexity for customers here in the United States and in Brazil. These contracts will maintain Eastern’s reputation as the largest OSV/PSV and MPSV new construction shipyard in the United States. Eastern currently has more than 1,500 employees and expects to add more than 200 new employees in all shipbuilding trades to fulfill future contracts.