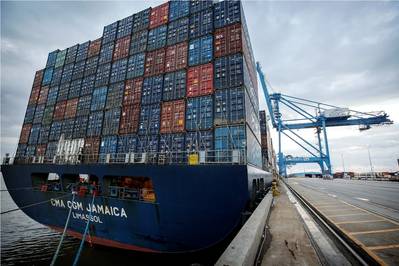 “CMA CGM is proud to be expanding our presence in New Orleans, further showing our commitment to the Gulf region, and Louisiana specifically.  We look forward to continued growth in the region, and are pleased to be contributing to the evolution and development of this vital hub. In the U.S., the Group now offers a global coverage with 23 services in and out of North America to over 150 countries around the world,” said Marc Bourdon, CMA CGM America LLC President.

The faster transit times provided by the new direct service enhances the Port of New Orleans’ reach for shippers and competitive advantage overall. It also helps both the region and state of Louisiana by serving as a catalyst to attract new business.

“Louisiana is an international gateway for goods bound to and from America’s industrial heartland, and having this new direct service for shippers to vital Asian markets will create greater value for our economy,” Louisiana Gov. John Bel Edwards said. “As we see billions of dollars of new industrial investments being made in Louisiana, strategic shipping services by CMA CGM and others will enhance existing import-export operations while making our state even more desirable for foreign direct investment projects.”

CMA CGM, the world’s third-largest container carrier, has called at the Port of New Orleans since 2009 and currently operates two weekly services, the Med-Americas Service to the Caribbean and South and Central American ports from New Orleans and the Victory Bridge Service to Northern European ports.

“CMA CGM’s announcement is great news for the Port of New Orleans and Louisiana’s international trade community in that it brings Asia one giant step closer to our doorstep,” said Port President and CEO Gary LaGrange. “Our team has worked diligently to attract this service.”

“CMA CGM’s new direct Asia container service will enhance the competitiveness of the Port of New Orleans and Louisiana by providing faster transit times and expanding the port’s reach for shippers,” Christian said. “Initiating this service from New Orleans accomplishes a strategic goal for the port and will serve as a catalyst to attract new business to the region. We look forward to working with CMA CGM to ensure the service’s success.”

The new service offers a 26-day transit time from Asia to New Orleans, which positions the Port to grow the recently opened Mississippi River Intermodal Terminal’s service to key markets such as Memphis, TN; Chicago, IL; Detroit, MI; Indianapolis, IN and Toronto, which are all serviced daily by CN Railroad. The direct service also adds capacity and reliability for exporters and is strategically timed to serve the surge in resin exports in 2017.

The provider of maritime construction services Jan De Nul said that a new lock complex along the Lys river in Harelbeke,…