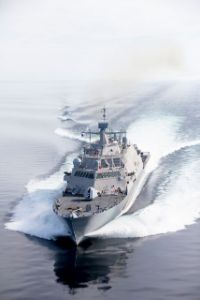 The Port of Indiana-Burns Harbor will host Indiana’s first U.S. Navy vessel commissioning ceremony when it commissions the USS Indianapolis littoral combat ship on Saturday, Oct. 26 at its facility on Lake Michigan.

The commissioning of USS Indianapolis will mark the fourth time a U.S. Navy vessel will bear the name of Indiana’s capital city. The name has a rich heritage, dating back to World War I. The most notable vessel, USS Indianapolis (CA 35), was torpedoed by a Japanese submarine in 1945 in the closing days of World War II. Only 317 of the 1,196 men on board survived. The last USS Indianapolis ship was SSN-697, which was decommissioned in 1998.

"As Governor and as a veteran of the United States Navy, it is a great honor to celebrate and commemorate the lives of all who have served on the first three Indianapolis ships,” Indiana Gov. Eric J. Holcomb said. “The USS Indianapolis (LCS 17) will be a proud representation of the spirit of service embodied in the lives those of us who have called Indiana and Indianapolis our home.”

USS Indianapolis (LCS17), a Freedom-class Littoral Combat Ship (LCS), was built in Marinette, Wisconsin by Fincantieri Marinette Marine for Lockheed Martin. According to Lockheed Martin, the LCS is an automated combat ship that can deliver dominance in near-shore environments. The flexible hull design allows for modification to integrate capabilities including over-the-horizon missiles, advanced electronic warfare systems and decoys.

During acceptance trials, LCS 17 underwent a full-power run, maneuverability testing and surface and air detect-to-engage demonstrations of its combat system.

Several dignitaries will be present to witness the occasion, including Jill Donnelly, wife of former Sen. Joe Donnelly, who serves as the ship’s sponsor.