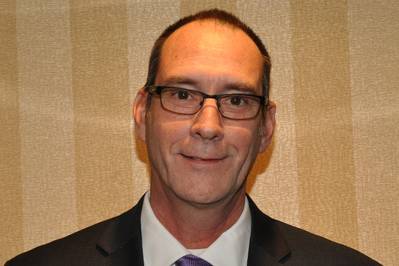 Gaspardo is President of Padelford Packet Boat Co. Inc., St. Paul, Minn. Founded in 1969 by Capt. William Bowell Sr., Padelford provides a wide variety of public cruises and private events on the Mississippi River with three passenger subchapter K vessels at Harriet Island Regional Park in downtown St. Paul. The company was a founding member of PVA and has been an active member in the association.
A 1982 graduate of St. Thomas Academy, Gaspardo attended Mankato State University. He joined Padelford as a deckhand in 1984 and obtained his Masters license in 1986. Gaspardo and his wife, Tammy, purchased the company from the Bowell family in 2016.
Padelford actively participates in drills and exercises with local Coast Guard, Police and Fire agencies and with Maritime Security Response Team Chesapeake during the 2008 Republican convention.
Gaspardo has been Chairman of the Regulatory Committee for PVA, Rivers Region chair, participates in the PVA/Coast Guard Quality Partnership meetings and also participates in PVA-sponsored Congressional Fly-Ins
Also elected to terms as PVA Officers for 2018 were Vice President Bob Lawler and Secretary-Treasurer Colleen Stephens.
Lawler has served as 2016 PVA Secretary-Treasurer, a member of the PVA Board of Directors and was Chairman of PVA Safety and Security Committee from 2014 to 2016. He is currently General Manger for Boston Duck Tours in Boston, Mass. Boston Duck Tours operates 28 amphibious vehicles carrying over 600,000 passenger each year.
Lawler began his career in the maritime industry in 1990 as a deckhand with Bay State Cruise Company in Boston. After graduating from Marquette University in Milwaukee, Wis. in 1993, he obtained his 100 ton Masters license and worked as a full time Captain for Entertainment Cruises over the next 11 years in Boston, Chicago and Seattle before returning home to Boston where he worked as General Manager and VP of Marine Operations for a fleet or 38 vessels in 6 ports until 2017. The company's brands include Spirit Cruises, Odyssey, Bateaux New York, Elite Private Yachts, Mystic Blue Cruises, Seadog and Potomac Riverboat Company.
Stephens has served on the PVA Board of Directors from 2015 to 2017, and is the President of her family's business, Stan Stephens Glacier & Wildlife Cruises. Stan Stephens Cruises operates two catamarans in Prince William Sound, Alaska.
Stephens started her career in the maritime industry at age 7 in 1978 as she worked alongside her parents and sisters as they shared the glaciers and wildlife of the Sound with Alaskan travelers. Through the years the company has operated a variety of Subchapter T vessels between the ports of Valdez, Whittier and Cordova. As time progressed, Colleen's role in the company changed to coordinating the operations of the company, overseeing crew and vessel safety training, as well as facilitating their marketing and promotions.
In addition, Steve Jones, Gateway Clipper Fleet, Pittsburgh, Pa. was newly elected to the PVA Board of Directors.