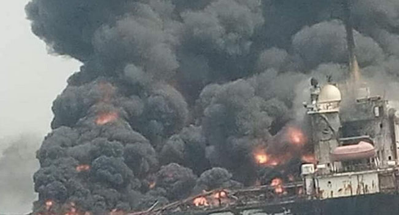 The vessel had 10 crew on board when it exploded on Wednesday, Nigeria's Shebah Exploration & Production Company Ltd (SEPCOL) said, adding that three were found dead on Sunday after three people had been found alive last week.

"Our priority remains focused towards establishing the whereabouts, safety, and security of the four crew members still missing," the company said.

The Trinity Spirit floating production, storage and offloading (FPSO) vessel was not producing oil at the time of the blast, after the consortium running the oilfield, including SEPCOL, lost its production license in 2019.

Two oil industry sources and an environmental group said the vessel was old and badly maintained prior to the explosion. One source said major trading firms had stopped using it to store crude. read more

The company has not responded to requests for comment on the allegations.

Nigeria's environment minister said on Saturday the vessel had been storing about 50,000-60,000 barrels of crude, well below its capacity of 2 million barrels.

The government's National Oil Spill Detection and Response Agency was carrying out a second aerial survey on Monday.