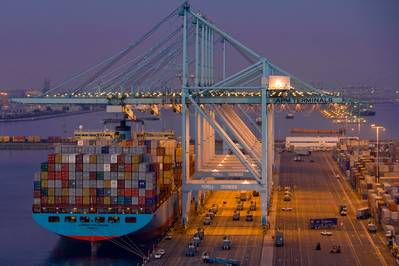 The American Association of Port Authorities (AAPA) applauded Senate passage over the past weekend of the Bipartisan Congressional Trade Priorities and Accountability Act of 2015 (TPA-2015), and today sent a letter to House leadership to urge making passage of TPA-2015 a priority.
Trade activity through seaports accounts for 26 percent of the U.S. economy, generates over 23 million American jobs, and provides over $320 billion in local, state and federal tax revenues, the AAPA noted.
In the letter, AAPA President & CEO Kurt Nagle states, “…this legislation will open the door to new markets for American goods and services, boost U.S. economic growth and support well-paying jobs nationwide.”
U.S. port leaders will join U.S. Transportation Secretary Anthony Foxx on a media conference call this afternoon at 3:30 p.m. EDT, to discuss the vital link between trade and the U.S. economy. Secretary Foxx will be joined on the call by AAPA Chairwoman of the Board and Port of Hueneme CEO Kristin Decas, Port Tampa Bay President and CEO A. Paul Anderson, Port of Seattle CEO Ted Fick, and Port of New Orleans President and CEO Gary LaGrange.