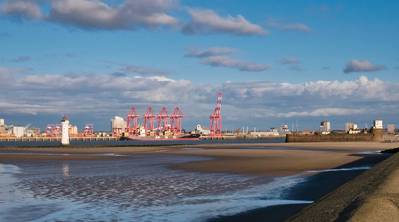 Over 500 dockworkers at the Port of Liverpool, one of Britain's largest container ports, have launched a two-week strike over pay, the Unite trade union said on Tuesday, adding to a wave of industrial unrest caused by soaring inflation.

The Liverpool strike from Sept. 19 to Oct. 3, which was announced earlier this month, will overlap a second walkout by workers at Felixstowe, Britain's top container port, which starts on Sept. 27.

More than 560 port operatives and maintenance engineers employed by Mersey Docks and Harbour Company (MDHC) are striking in Liverpool over a pay rise equating to about 8.3%, Unite said.

With inflation having topped 10% in July and projected by the Bank of England to exceed 13% next month, Unite says MDHC's pay offer represents a "real terms pay cut."

It is the latest strike to disrupt rail services across Britain this summer and comes as industrial unrest affects a range of industries, from aviation and transport to nurses and lawyers.

In a statement on Tuesday, Peel Ports said it had committed to a shift pattern change that would result in a 25% reduction in night-shift working.

"We urge the union to work with us at the negotiating table so together we can find a resolution,” Peel Ports said.

Unite's Liverpool port workers are also striking over MDHC's failure to honor the 2021 pay agreement, the union said in its statement.