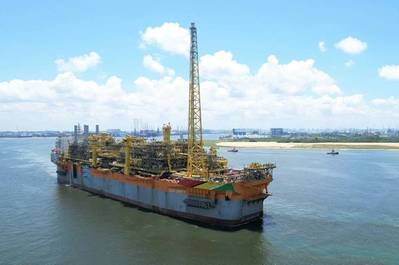 The production storage and offloading (FPSO) facility is expected to add 220,000 barrels per day (bpd) of oil capacity to Guyana's current 120,000-bpd output when it reaches maximum capacity. Its startup is expected for early 2022.

Exxon's first FPSO, the Liza Destiny, inaugurated the nation's output in late 2019 from the Liza-1 well, discovered in 2015. About 10 billion barrels of recoverable resources have so far been discovered by Exxon and partners Hess Corp and CNOOC at the vast Stabroek block offshore Guyana, which includes Liza, Payara and many other projects.

"The Liza Unity FPSO vessel has arrived in the Stabroek block offshore Guyana after traveling nearly for 53 days and more than 11,000 nautical miles on its journey from Singapore," Exxon said in a statement.

The floating facility, which can treat 400 million cubic feet of associated gas per day and store around 2 million barrels of crude, will be connected to the spread mooring before preparation for testing and commissioning, the company added.

The Liza project's $6-billion second phase will include a total of six drill centers and approximately 30 wells.

(Reporting by Marianna Parraga and Sabrina Valle in Houston, and Neil Marks in London Editing by Marguerita Choy and Barbara Lewis)