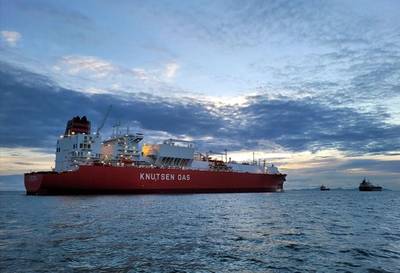 Several ships carrying liquefied natural gas (LNG) anchored off Spain's Bay of Cadiz are likely to stay there until late November in anticipation of a rise in European gas prices, industry sources said.

Dozens of ships have been circling off the Iberian coast and in the Mediterranean sea for weeks, unable to secure slots to unload their LNG cargoes as plants that convert the superchilled fuel back to gas are operating at maximum capacity.

The high volume of LNG in floating storage exposes Europe's lack of "regasification" capacity just as the continent stocks up for a winter of substantially less Russian pipeline gas.

But industry sources say some of the waiting ships are part of a trading strategy from their respective companies, anticipating higher prices.

"They are waiting for higher prices. If one single idling vessel discharges its cargo, the price will immediately collapse by affecting the other cargoes on the queue and this domino effect is so painful in terms of opportunity cost," one of the sources said.

European natural gas prices are at their lowest since June, dropping 28% in a week, partly due to high inventory levels and above-normal temperatures, according to Rystad Energy.

"For those floating storage cargoes sold on a DES (delivery ex ship) basis, we’re expecting most of these to be delivered in early November, though some firms may push deliveries yet further into winter," said Samuel Good, head of LNG pricing at commodity pricing agency Argus.

One of the other ships belongs to BP, three to commodity trader Trafigura and one to U.S. Cheniere and the last one is empty, the sources said, adding that vessels are sometimes subleased by other companies.

A Naturgy spokesperson said that its ships have assigned discharge slots in Spain and are waiting for those dates to unload.

Spanish port authorities said that some ships had been waiting since mid-September.

One industry player said there were no problems with the slots allocated in September in Spain.

"Currently, prices are declining pretty fast and paradoxically, these cargoes will seize less value than in September or early October," he said.

Toby Copson, global head of trading and advisory at Trident LNG said cargoes were unlikely to be redirected to Asia, given soaring freight costs and as prices are lower than in Europe. European LNG cargo prices for December remain competitive versus Asia for U.S. origin LNG.

Prices between November and December remain in contango, where the futures price of a commodity is higher than spot levels.

Meanwhile, some tankers that had been waiting in the Mediterranean since September recently moved, heading to Northwest Europe and UK terminals, data intelligence firm ICIS said.

While some spare slots are available at Britain's Isle of Grain and Dragon in late October and early November, daily gas prices at onshore hubs will be under bearish pressure as terminal tanks clear space to tackle the LNG backlog, said Alex Froley, LNG analyst at ICIS.

"However, gas prices remain much higher than in first half 2021 and prices for winter next year aren’t falling back as much as the month-ahead," he added.