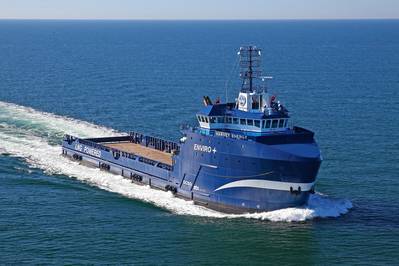 A special Offshore Supply Vessel (OSV) has been delivered to Shell for its deepwater operations in the Gulf of Mexico.
The vessel, Harvey Energy, is chartered from Harvey Gulf International Marine and is the first of its kind in the region to run on both liquefied natural gas (LNG) and diesel. Built by the Gulf Coast Shipyard in Mississippi to meet requirements of the ABS “ENVIRO+, Green Passport” notation, the vessel is 302 feet long and operates on three dual-fuel Wärtsilä engines. It will run on 99% LNG fuel and will be able to operate for around seven days before refueling. It will load from Harvey Gulf’s new LNG bunkering facility at their terminal at Port Fourchon, Louisiana’s southernmost port with more than 600 oil and gas drilling rigs and platforms located within a 40-mile radius. From there the Harvey Energy will go to Shell’s platforms, such as the new Olympus production platform, bringing equipment and drilling fluids. In addition to using LNG as a fuel, the OSV will also use high efficient Gadinia 40 as its engine oil.
Shell said two more LNG-fuelled vessels are expected to follow. LNG fuel is a new alternative for vessel operators in the Gulf of Mexico responding to new sulphur and nitrogen oxide emissions regulations, as part of the North American Emission Control Area (ECA).