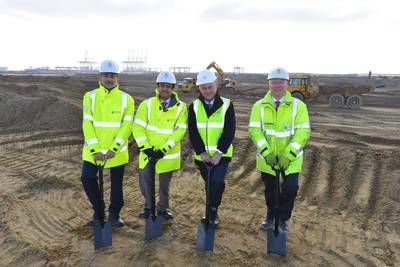 A ground-breaking ceremony was held at DP World’s London Gateway Logistics Park to mark the start of construction on a 316,000 square foot distribution facility. The building is being developed speculatively as an equal joint venture between DP World, one of the world’s largest port operators, and Prologis, the global leader in industrial real estate.

The new single-sided 15-meter high distribution center, which has been designed to offer flexible distribution space, will have a 55 meter yard and space for expansion.

The development, which also comprises more than 10,000 sq ft of office space, is being built on Europe’s largest logistics park, which provides 9.25million sq ft of development space. The facility, which has been designed to achieve BREEAM ‘very good’ accreditation and the best possible Energy Performance Certificate (EPC) for its size, is being constructed by Buckingham Group.

The unit is scheduled to be ready for occupation by the third quarter of 2015 and has the potential to bring approximately 100 full-time jobs.