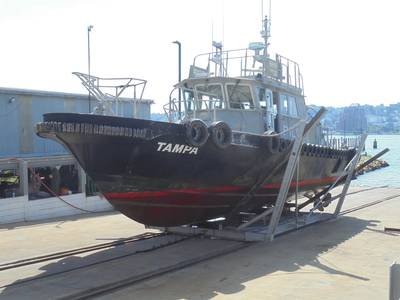 The Tampa Bay pilot association has returned its first Chesapeake Class pilot boat to Gladding-Hearn Shipbuilding. Tampa was built in 2003 when the shipyard introduced the class of mid-size, high-speed launches. In 2015, the Tampa pilots took delivery of the shipyard’s first Chesapeake Class MKII, which incorporates the performance benefits of Volvo Penta’s IPS 2 pod system.

With more than 50,000 operating hours, the 53’ all-aluminum pilot boat will be repowered and undergo repairs after a thorough inspection by the shipyard’s quality control department. “After 19 years of hard work, the vessel is showing some wear and tear but she still has a lot of life left so it’s definitely worth re-investing in,” said Peter Duclos, Gladding-Hearn’s co-president and director of sales.

Along with modifying the engine beds, hull frames, exhaust systems, cooling and fuel system piping to accommodate the new engines, the yard will replace the twin 600 Bhp Caterpillar 3406E engines with a pair of Caterpillar C18, EPA Tier 3-compliant diesel engines, each delivering 670Bhp at 2100 rpm and a top speed of over 25 knots. After installing new shafts, bearings, seals and couplings, the engines will turn new 5-blade Bruntons propellers via Twin Disc MGX-5136A “Quickshift” gears. In addition, the pilot boat will receive a new Seastar Optimus steering system and a new Northern Lights 12 kW generator.

Other upgrades include new Norsap 1500 pilot seats, new windows, three new doors to the pilothouse and four new hatch covers. The boat’s bottom, topsides and pilothouse will be stripped to bare metal and receive a fresh coating system.