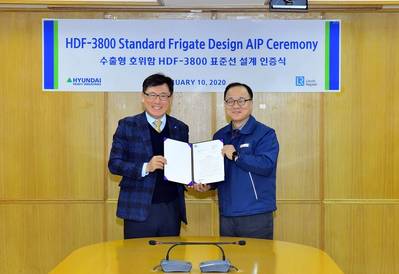 The design allows for the frigate to be equipped with modern weapons and sensors, and it will be able to undertake Anti-Air Warfare (AAW), Anti-Surface Warfare (ASuW), and Anti-Submarine Warfare (ASW) missions. Additional combat capabilities include Electronic Warfare (EW), Land Attack Warfare (LAW) and the capability of anti-drone systems and to launch and recover unmanned aerial vehicles (UAVs).

Furthermore, the ship will adopt the new HHI Hi-Bow hull, reflecting the most modern and hydrodynamically efficient design to maintain operational and war fighting capability in extreme environmental conditions.

The capabilities of this ship are such that it is expected to meet the most demanding requirements of international customers. By awarding this AiP, LR has helped the yard assure the integrity and reliability of the design and demonstrate compliance with government regulations, industry codes and standards.

After several false starts, 2021 is the year when the U.S. offshore wind industry begins to realize its potential. This is according to Philip Lewis…

ClassNK released the latest version of its design support software PrimeShip-HULL (HCSR) Ver.8.0.0 developed in response to the IACS Common Structural Rules for…