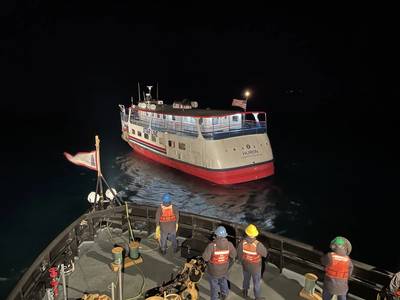 Passengers were removed from a Mackinac Island ferry that suffered mechanical issues and went adrift in the Straits of Mackinac on Tuesday.

The Star Line winter service ferry Huron had 144 passengers and four crewmembers on board when it lost steering at about 6 p.m. while on its way from Mackinac Island to St. Ignace, Mich., the U.S. Coast Guard said.

Unable to deploy its anchor due to a possible mechanical or weather-related issue, the 1950s-built vessel drifted slowly in open water toward St. Ignace, but was not in distress nor in danger of grounding, according to the Coast Guard.

A local commercial vessel that also serves Mackinac Island, Arnold Freight Line's Senator, responded and met the disabled ferry, taking all of its passengers aboard and transporting them to St. Ignace.

The four Huron crewmembers remained on board their vessel awaiting a tow from Coast Guard Cutter Katmai Bay, which was breaking ice in the area and diverted to tow the stricken vessel to St. Ignace

“Tonight’s incident can serve as a reminder that life on the Great Lakes is far from predictable,” said Lt. Tyler Carslgaard, USCG Sector Sault Ste. Marie. “Fortunately good cooperation and simple precautions like making sure everyone on board was wearing a life jacket helped everyone get home safely.”

Asked about the cause of the steering loss, Lt. Carlsgaard told MarineLink the incident is still under investigation and that the agency will be able to assess the damage and determine a likely cause in the next few days once the vessel is pulled out of the water. Lt. Carlsgaard confirmed that the Huron's inability to deploy its anchor is also under review.