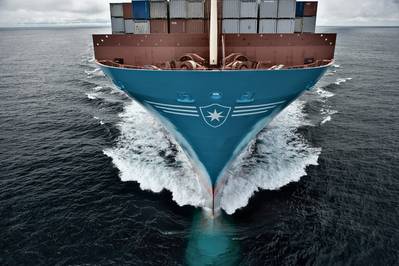 Volumes were 9.4% higher as Maersk Line was able to win a significant market share. All trades contributed hereto with largest increases in the East-West backhaul (19%) and North-South head haul (7.3%). By the end of 2016, Maersk Line’s total capacity had grown 9.4% compared to the end of 2015. Maersk Line continues to manage capacity tightly resulting in high utilisation.

“We made a loss in 2016 due to a 19% decline in freight rates. This loss is clearly unsatisfactory. On the positive side, we won market share, we continue to drive costs down and we increased our utilisation. We remain competitive. And we have a strategy that addresses the challenges in our industry. It will ensure that we continue to focus on customers, that we maintain our leadership position and that we again become profitable,” says Pierre Danet, CFO of Maersk Line.

In 2016, the container shipping demand growth was about 2-3% and the global container fleet (capacity) growth was about 4% compared to 2015. The gap between capacity entering and exiting the industry was the lowest in many years.

Compared to 2015, Maersk Line’s average freight rate declined with 19%. Despite some positive developments seen in the second half of 2016, freight rates remain depressed and unsustainable.

“Overall, container shipping demand grew below our expectations. However, in the last half of 2016, we experienced better industry conditions than in the first half. First due to a better supply demand situation, which resulted in an improvement in freight rates,” says Pierre Danet.

Maersk Line expects global container shipping demand to increase by around 2-4% in 2017.

“There are encouraging signs; however the market situation is still very challenging. Rates and demand levels remain low. That is why we will continue to manage our capacity tightly,” concludes Pierre Danet.

Maersk Line will delay the delivery of its nine (9) 14,000 TEU vessels. The vessels will be delivered with delays between one month and one year. The last vessel will be delivered end 2018 (from end 2017). The decision will also have a positive effect on Maersk Line’s cash flow.

Maersk Line has a clear cost leadership and is part of A.P. Moller – Maersk’s Transport and Logistics division. The division will help Maersk Line improve the product offering and customer experience through innovative and digitalised solutions and services.