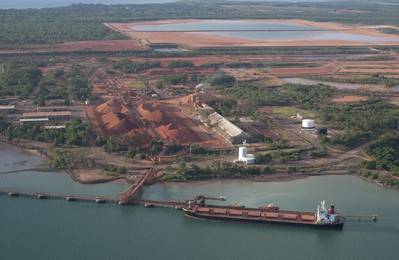 The world is in the midst of the second coronavirus wave and with that comes the natural question of how the current dynamics will play out for the dry bulk shipping market. Demand and the subsequent cargo flow of the major dry bulk commodities are critical for the freight market, as we enter the final quarter of the year.

Iron ore
…has without question performed well this year, on occasion even better than gold, driven by the robust demand generated by China, as the world’s leading iron ore consumer. In the aftermath of the coronavirus outbreak, the actions taken by the Chinese government to limit the impact of the pandemic and reignite the country’s economy, bore fruits.

Earlier in the year, the Asian nation announced a number of stimulus packages put forward to support its economy, with a great deal of them concentrated on metals-intensive infrastructure projects. Since China is outsourcing from overseas most of the iron ore needed for its steel production, this meant augmented seaborne demand for the raw steelmaking ingredient.

Meanwhile, the dominant countries that the commodity is sourced from, Australia and Brazil, both managed to keep up the pace of their own production, secure sufficient supply of the commodity and satisfy China’s hunger, with the country’s ore imports in the first eight months of the year to have been up 11% y/y.

Capesizes, being to a great degree iron ore carriers, have benefited significantly from China’s buying spree of the commodity. So much so, that despite the problematic landscape of the economies worldwide and the pandemic-induced disruptions in ports and supply chains, their TCE levels hit at the end of Q3 the $25,600/day mark, for the second time this year.

Since China is in need of high-quality iron ore which is imported from overseas, we expect the strong ore demand to support the freight rates for Capesizes going forward. Seasonality could temporarily ease demand, but basic metrics such as the Chinese increased industrial production and steel output as well as the low domestic ore stockpiles, are hinting the strong demand for ore imports. And they essentially back a relatively bullish sentiment for the larger vessels’ returns in the coming months.

Coal
…on the other hand, is following a different narrative. With the world’s largest coal importers, China and India, both imposing deep cuts in their projected future coal imports mainly to support their own domestic mining industries, overseas demand for the fossil fuel is subdued and therefore the cargo flow is expected thin for the rest of the year and possibly next.

Australian coal shipments are recently facing long delays when arriving in Chinese ports, essentially deriving from tighter restrictions and stricter import quotas. These are attributed not only to the attempt to propel demand for domestic supply, but are also viewed as a by-product of the sour Sino-Australian political relations. In addition, East Australian coal shipments will possibly face further disruptions due to the La Nina phenomenon until beginning of next year. On top of that, India has pledged to replace 150 million tons of imported coal with domestic production.

The recent announcement of the Chinese government to become carbon neutral by year 2060, although lacking much detail with regard to its implementation plan, begs the question of how coal demand will unfold in the mid to long-term. Despite said announcements, China is still investing in large-scale coal-fired power plants, but the global trend of declining investments in coal mining projects and the concurrent shift towards renewables, do not seem to paint a very bright picture for the future of the dry fuel.

Grains
…have been in growing demand throughout the year for reasons ascribed to China’s food security concerns in the midst of the pandemic and its need for restocking, as well as the recovery of the nation’s domestic swine herd. Furthermore, the Brazilian soybean production reached the historic high of 125 million metric tons in the 2019/20 season, which meant increased exporting activity, mainly to China which is by far the largest buyer of Brazilian beans. Official figures have recorded a 15% y/y increase of Chinese imports of the oilseed over the period January-August.

Heading towards the final stretch of the year, seasonality has shifted the focus to the U.S. Gulf and the Black Sea regions, from where shipments remain robust and thus assisting Panamaxes in enjoying firmer rates. As we stand at the end of Q3, the average spot returns for Kamsarmaxes are hovering in the mid $12,000’s/day region with expectations that the strong Chinese grain demand will drive freight rates upward for the remainder of the year.

The Phase One pact in tandem with the weakened U.S. dollar, have pushed Chinese purchases of American agricultural products up by about 25% compared to 2017, the base year for the Sino-U.S. trade deal. Most of the cargoes purchased are for delivery in Q4, for which sentiment for the smaller bulk carriers remains positive, primarily driven by the Atlantic region where the U.S. Gulf is set to absorb significant tonnage, thus pulling it out of supply for long legs.

However, the tense Sino-U.S. political relations have to remain closely monitored, especially following the upcoming U.S. elections in November, since the past few months have showed that Chinese state companies respond promptly to any political sour by immediately pausing their buying activity each time political developments weigh against Beijing.

Final notes
Despite the decade-and-a-half low orderbook, 2020 has seen many newbuilding vessels thrown in the water (the figures compare to the year 2016 which saw an influx of new vessel deliveries and freight rates where indeed very much depressed). However, the relatively healthy demand for the major dry bulk commodities is offering some much needed solace, although it remains to be seen to which extent demand can balance the supply.

Another development one has to factor in is that key countries such as China and Australia have recently tightened their regulations for vessels calling their ports and have imposed a number of proceedings in order to contain Covid-19 transmission. This effectively means that more than usual delays occur in the international seaborne trade. Albeit they do not stem from the actual carrying of a cargo but from logistical procedures such as the repatriation of seafarers and deviation to third ports for crew change, tonnage supply can be somewhat squeezed in the short term, especially in the Pacific region.

It is of no doubt that the challenging circumstances we have all been required to live in have created a difficult to navigate environment. Ships are the vehicles that transport the world’s economy and the ongoing global health crisis has complicated even further the supply/demand fundamentals and their future projections. We can all hope that humanity will overcome yet this hardship the soonest possible.

Baltic Index Nudges Up, But Registers Fall for Third Week

The Baltic Exchange's main sea freight index, which tracks rates for capesize, panamax and supramax vessels, rose on Friday, buoyed by an uptick in de