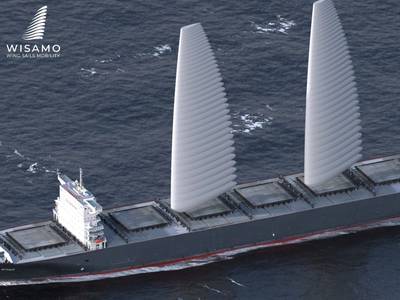 French tire maker Michelin and Compagnie Maritime Nantaise said on Thursday they will jointly test Michelin's inflatable wing sail this year on a merchant ship for the first time, in a move that may help the shipping industry cut its emissions.

The Wing Sail Mobility (WISAMO) project is centered on an inflatable, retractable and automated wing that can be fitted on commercial vessels and pleasure boats, the statement said.

Using wind propulsion, it could help save up to 20% of the fuel used per ship, Michelin estimates.

Under the partnership deal, a wing prototype with a surface area of 100 square meters will be installed on Compagnie Maritime Nantaise's container ship “MN Pélican”.

Starting from the end of 2022, two weekly rotations between Spain and Great Britain will operate including the WISAMO wing sail system. If the trials are successful, the partnership deal could open the door to tests using a larger wing sail.