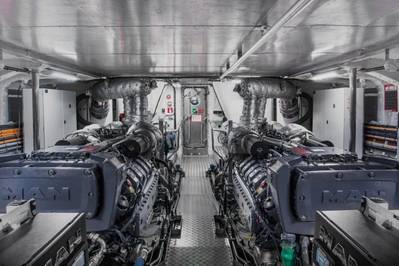 MAN Engines said it has approved all marine engines from its current product range for use with renewable diesel fuel in line with the standard EN15940 in Europe and the US-American specification ASTM D975 of the American Society for Testing and Materials (ASTM) with immediate effect. This will allow customers to replace conventional petroleum-based diesel fuel with "green" or renewable diesel fuel. Renewable diesel fuel is obtained from waste and residues of animal and plant origin, cellulosic biomass such as crop residues, but also hydrotreated vegetable oils (HVO).

"With the approval of marine engines for renewable diesel fuel, MAN Engines is making an important contribution to sustainability, both in recreational and professional sailing," stated Claus Benzler, Head of Marine MAN Engines.

The combustion of renewable diesel fuel releases approximately 30% fewer particles and approximately 10% less nitrogen oxide (NOx). "Renewable diesel fuel ensures cleaner combustion with fewer emissions. Despite this, there are neither reductions in performance nor disadvantages with regard to service and maintenance intervals," explained Werner Kübler, Head of Engineering MAN Engines.

The use of an exhaust gas aftertreatment system also does not have any negative effect on system components or the drive's efficiency if "green" fuel is used. Another aspect that warrants highlighting is that the use of renewable diesel fuel does not require any changes to be made to existing vehicles or the refueling infrastructure. The renewable fuel can be refueled in a pure form, meaning 100% renewable diesel fuel without the addition of conventional diesel fuel.

Specifically approved for renewable diesel fuel are the MAN D2862, D2868 and D2676 series with 12, 8 and 6 cylinders, which are used in yachts and sport fishing boats as well as work boats. This includes the full MAN marine engine performance range from 200 to 2,000 HP (147 to 1,471 kW). They are operated in line with the emission guidelines issued by the U.S. Environmental Protection Agency (US EPA), the International Maritime Organization (IMO) or the European Union (EU).