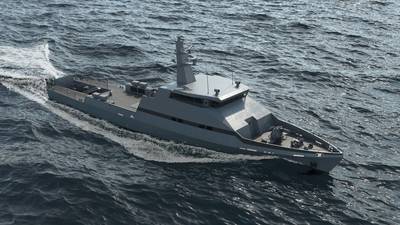 MAN Energy Solutions announced Thursday it has won the contract to supply complete propulsion packages to two OPV-45 offshore patrol vessels currently under construction at one of the largest privately owned shipbuilding and repair facilities in the Eastern Mediterranean.

Israel Shipyards in Haifa is constructing the new patrol boats for an undisclosed African navy. The vessels are designed for a wide range of missions, including protection against the increasing threat of piracy in the region.

The OPV-45 has an overall length of 45.7 m, a displacement of some 300 tons. They are capable of sustained speeds above 24 knots and have maximum range of over 3,500 nautical miles.

Ben Andres, Head of High-Speed Sales, MAN Energy Solutions said, “The MAN 175D type is ideally suited to demanding naval applications and this is the latest in a series of orders we have won globally. The engine’s technical and economical credentials stand it in good stead, while its compactness, shock capability and best-in-class fuel-oil consumption are always key criteria for customers. Delivering complete propulsion packages to these two vessels also meets our ambition to increasingly become a supplier of complete solutions.”

Offered in three variants of 12, 16 and 20 cylinders, the MAN 175D engine is available with an output ranging from 1,500 to 4,400 kilowatts and is optimized for propelling ferries, offshore supply vessels, tug boats and other working vessels. Specialist model versions are also available for other markets, such as superyachts and naval marine applications.

According to MAN, it is also an extremely eco-friendly engine, being designed from the outset with compliance to the latest, as well as future, exhaust-gas-emission requirements and utilizes a very compact and flexible SCR system, which enables vessel designers to optimize space on board to the maximum.