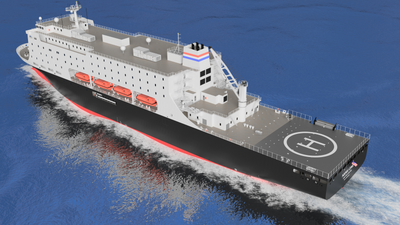 Not only is the Maritime Administration (MARAD) back in the shipbuilding business with the National Security Multi-Mission Vessels (NSMV), the agency is using an innovative procurement method using an indefinite delivery, indefinite quantity (IDIQ) approach for these ships to be flexible for appropriation cycles. This method marks a fresh approach by the Federal government to procuring new ships and could serve as a model for future shipbuilding projects.

“Many eyes in the Federal government are closely following the NSMV process as a possible model for other Federal shipbuilding needs,” Maritime Administrator Mark Buzby noted, “especially for non-warship vessel construction, such as replacement of the Nation’s aging and in many cased obsolete strategic sealift vessels. I believe the NSMV procurement model can offer an affordable means to recapitalize our sealift fleet.”

Unlike ships procured by the Armed Forces, the NSMV is being procured by a non-government entity—TOTE Services—an experienced U.S. ship operator and builder, on a fixed-price, firm-delivery-date basis, using standard negotiated commercial shipbuilding practices. TOTE was selected following a vigorous national competitive process. The NSMV concept design, developed by MARAD over several years, is a mature one that uses off-the-shelf technology and fittings. This allows TOTE to enter a commercial ship construction contract with a U.S. shipyard, selected by the company’s own competitive commercial practice.

During negotiations, TOTE and Philly Shipyard addressed the risks associated with shipbuilding on a mature design, which allowed a firm-fixed-price contract for up to five ships. Building the ships in a series by a single shipyard using a common design enables significant construction savings and reduced lifecycle costs. Under the contract, Philly Shipyard is required to deliver the first ship to TOTE Services in 36 months, with the second ship delivered six months later.

While the approach being pioneered by MARAD is innovative, its history can be traced back to World War II when the U.S. industrial base built thousands of merchant ships. Admiral Emory S. Land, the renowned head of MARAD’s predecessor organization, when asked what the secret was to building so many ships so quickly and cheaply, replied, “common design; no change orders.” In the challenging construction phase of the NSMV, the wisdom of this approach, empowered by the new paradigm, will be put to the test again.

What is the NSMV?
The NSMV is a new class of training ships, aptly named the State-class. The order given to the shipyard is for two ships with options for up to three more sister ships. The ship is a state-of-the art training vessel that will provide at-sea training for up to 600 cadet-midshipmen at a time from the six state maritime academies located in California, Maine, Massachusetts, Michigan, New York and Texas.

In addition to serving as a training vessel, the ship can seamlessly convert to national humanitarian-assistance missions with a large berthing and messing capability, roll-on roll-off (ro-ro) cargo space, and a helicopter deck. On these missions, when pier side, the ship can accommodate up to 1,000 disaster responders and provide a command and control platform to a coastal U.S. city coping with a natural disaster, such as a hurricane or earthquake.

These ships are over 524 feet in length, more than 7,200 metric tons deadweight, and able to navigate at a speed of 18 knots, powered by four Tier 4 General Electric main engines.

The ships’ construction will inject much needed work for the nation’s shipbuilding industrial base, so critical for national security.