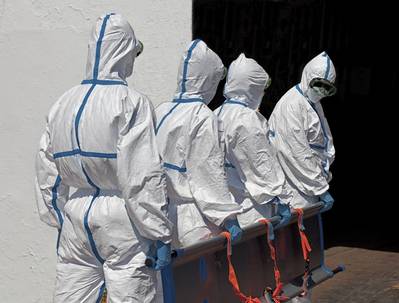 Brazil, Argentina and the United States have tightened port entry procedures for ships that have sailed from West Africa in a bid to control the potential spread of the deadly Ebola virus.

Ebola has killed more than 3,400 people in Guinea, Sierra Leone and Liberia, and its spread has become a global concern -- with worries for trade, which could affect the airline and tourism industries together with seaborne activity.

The virus is already threatening to disrupt logistics activity in West Africa and has already rattled commodities and mining markets as the region is a major source of raw materials such as iron ore as well as crude oil, bauxite and cocoa.

The U.S. Coast Guard announced on Tuesday it would screen individuals coming into the United States via ships from Ebola hot spots.

"The Administration continues to take thoughtful and straightforward steps in protecting Americans from Ebola, through stronger screening at our ports of entry," said lawmaker Charles Schumer.

The first person diagnosed with Ebola in the United States, died on Wednesday morning at a Dallas hospital, a hospital spokesman said.

Preventative measures have been imposed at airports in several countries and ports also following suit. While most ports have yet to quarantine ships and their crews coming from affected areas, more rigorous screening is being imposed, which could potentially slow shipping activity.

U.S. Secretary of State John Kerry on Wednesday appealed to the international community to do more to help contain the spread of Ebola, and urged countries not to shut their borders.

Brazil's health surveillance agency Anvisa said this week ships which docked in Ebola-affected countries in the last 21 days will receive clearance to dock at Brazilian ports only after a thorough analysis of medical records and logs showing medicine used.

"The ship that arrives from affected areas with no suspected case is cleared by communication over the radio ... If necessary, inspectors may come onboard to verify, in detail, the sanitary conditions," Anvisa said, adding that in case of a suspected Ebola case, the ship will be docked at a special and isolated location and sick people immediately taken to hospital.

"There is very little control that the (ship's) master can exert over what labour is used," ship insurer Steamship Mutual said.

"Delays to vessels calling at ports where they have previously called at West African ports are likely to increase. If such a vessel has stowaways aboard, the situation will be worse as authorities try and determine identities and any health problems."

The spread of the virus comes at a crucial time for South America's export season for key commodities including grains and sugar, when shipping activity traditionally gathers pace.

Shipping agent Williams also confirmed that at one of Brazil's top commodities ports Santos, ships arriving directly from ports in affected African countries need to wait around 10 days before they are allowed to dock, providing there are no developing health concerns among the crew.

The journey across the Atlantic takes around 10 days, which should just cover Ebola's potential 21-day incubation period.

Last month the authority running the Panama Canal, a major global trade artery, said it would monitor the last 10 port calls of all vessels arriving in the waterway.

"If Ebola is diagnosed, the vessel will be placed in quarantine until MINSA (health ministry) authorities declare it safe for boarding," Esteban Saenz of the Panama Canal Authority said in a statement on Sept. 23.

Michael Frodl of U.S. based consultancy C-Level Global Risks said: "Panama needs to protect its human infrastructure: if the people who operate the Canal were to fall sick, we worry who could come in to reopen it."