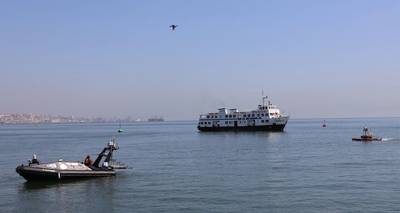 New ICARUS system ready for use from 2016

The ICARUS European project aims to develop robotic tools to assist crisis intervention teams. Playing a role in developing the maritime component of this project was NATO Center for Maritime Research and Experimentation (CMRE), whose assistance including enhanced autonomy and integration between Unmanned Surface Vehicles and Unmanned Aerial Vehicles.

On July 9-10, 2015, at the Portuguese Navy Base of Alfeite (Almada) in Lisbon, 24 Project Partners from nine countries demonstrated the ICARUS (Integrated Components for Assisted Rescue and Unmanned Search Operations) system, as final step of the ICARUS European project funded by the European Commission under the Seventh Framework Program for Research and Innovation (FP7). Started in 2012, ICARUS has been devoted to develop advanced robotic platforms, which can support crisis intervention teams in detecting, locating and rescuing humans in danger, in maritime and land disaster scenarios. Unmanned Search and Rescue (SAR) devices offer tools for saving human lives and for speeding up the SAR process. This is particularly crucial for maritime incidents, in which survival times are short and during which even SAR teams take considerable risks.

During the ICARUS final event in Lisbon, the Project Partners coming from Portugal (CINAV, INESC, ESRI), Spain (EURECAT and INTEGRASYS), Switzerland (ETHZ), Italy (CMRE, Calzoni), Poland (IMM) and Belgium (SpaceApplicationServices) demonstrated the effectiveness of the system in case of maritime accident. “Let’s say that a passenger ship strands or drowns in high sea, but the atmospherical and maritime conditions do not allow the search and rescue teams to perform the victims’ rescue operations in safety,” said Aníbal Matos, researcher from INESC TEC (INESC Technology and Science) and lecturer at the Faculty of Engineering of the University of Porto (FEUP), one of the responsible people for ICARUS Sea Trials in Lisbon 2015. “One solution would be to use autonomous robots that can help these teams in catastrophic situations.”

The demonstration included Unmanned Surface Vehicles (USVs) and Unmanned Aerial Vehicles (UAVs), linked together in a shared robotic network that enhances interoperability and full collaboration. CMRE intelligent autonomy tools have been fully integrated into an existing robotic asset (USV) developed by an Italian company, L3 Calzoni. “Thanks to CMRE cutting-edge innovative technologies, the system, assisted by an unmanned salvage boat developed by INESC-TEC, is now capable of full autonomous SAR operations at sea with minimal human supervision. All the robots are integrated by means of standard protocols into the ICARUS robotic network,” explained Stefano Fioravanti, Scientist in Charge for ICARUS at CMRE.

The system will be ready for use from 2016 when the ICARUS project officially ends. The Project’s Consortium includes end-users, such as the Portuguese Navy and the Belgian First Aid and Support Team (B-FAST), which already showed interest in further exploitation of the technology, as complementary support tool for SAR teams.