The trailing suction hopper dredger (TSHD) Scheldt River was officially named  at the DEME head office in Zwijndrecht, Belgium. The dredger was named by Veerle Hegge, the wife of Bart De Wever, Mayor of Antwerp. The 8,400 m³ Scheldt River is the second dredger in the DEME fleet equipped with dual fuel engines. The highly innovative vessel can operate in LNG mode, reducing carbon dioxide emissions, almost eliminating sulphur, NOx and particle emissions. LNG is intrinsically clean and there is no need for exhaust gas cleaning systems.

The well-preserved wreck of a World War One German submarine, possibly still containing the bodies of its 23 crew members, has been found off the Belgian coast. The use of submarines, often referred to as U-boats, in World War One to disrupt British trade routes in the English Channel and the North Sea was a key part of German tactics. The 93 German U-boats stationed in Belgian ports downed more than 2,500 ships but were also a target themselves, with 70 of them lost at sea, killing 1,200 sailors.

The 2002-built, 8,850-dwt freighter Flinterstar is owned by Dutch shipping firm Flinter has sank after colliding nearly head on with the Marshall Islands-flagged LNG carrier Al-Oraiq in the North Sea off Belgium on Tuesday morning. The both vessel were in opposite directions, as the gas carrier was approaching the port fully loaded with LNG and saw the freighter from the starboard. Unfortunately Al Oraiq did not maneuvered accordingly and collided with general cargo ship, which got large breach under the waterline and sank near the scene of the accident. 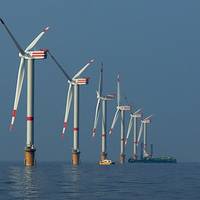 ABB commissions Thornton Bank wind farm connection in the North Sea which will see 325 megawatts of clean wind energy integrated into the Belgian grid. The project was completed ahead of schedule. The Thornton Bank wind farm was inaugurated by the Belgian Prime Minister Elio Di Rupo, adding more than 1,000 gigawatt-hours (GWh) of electricity generation capacity per year to the Belgian grid. This is the equivalent to the annual power consumption of about 300,000 households in Belgium. 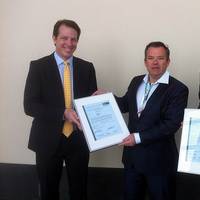 Northwind NV received statements of compliance for site assessment and site specific design assessment from GL Renewables Certification (GL RC). The Northwind Offshore Wind Farm will be located on the Bank Zonder Naam (Lodewijkbank) off the coast of Zeebrugge, Belgium. Construction of the wind farm, which includes 72 Vestas V112 turbines, begins this year, with completion scheduled for 2014. The statements of compliance were presented to Frank Coenen, CEO of project developer Northwind NV, at the Offshore Wind Power USA conference in Boston. 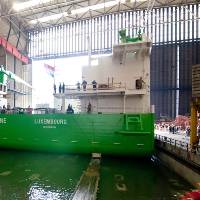 The launch ceremony for the NEPTUNE took place on 23 September 2011 at the IHC Merwede shipyard in Krimpen aan den IJssel, The Netherlands. The self-elevating heavy-lift jack-up vessel is being built by IHC Merwede for GeoSea NV, the offshore marine construction specialist company within the DEME Group, based in Belgium. The contract for the detailed design, construction and delivery of the vessel was signed between GeoSea and IHC Merwede on 16 September 2010 and the keel was laid on 25 March 2011. 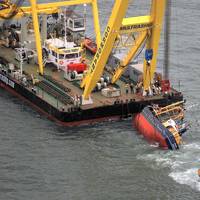 LEADING towage and salvage specialist Multraship has salvaged the fishing trawler Nieuwpoort 28 (N28) which capsized off Dunkirk on March 1, using its recently upgraded floating sheerlegs Cormorant to successfully complete a challenging operation. The trawler capsized twenty miles off the French/Belgian coast. It was upside-down in the water and the French and Belgian Coastguards mobilised a Search & Rescue operation during which Navy divers searched the vessel but were unable to find any of the trawler’s three crew members – two brothers and their brother-in-law… 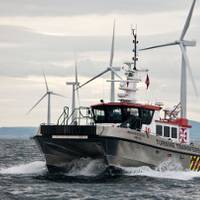 Turbine Transfers Ltd will increase its fleet to 20 vessels by the end of 2011. With the fast growing development of major offshore wind farms in Britain, Belgium, Holland, Germany and Denmark, Captain Mark Meade of Anglesey UK-based Holyhead Towing, has seen the potential for larger fleets of crew transfer vessels dedicated to the offshore wind farm industry. Often customers now require four or five boats at the larger and further offshore sites, and that demand cannot easily be supplied by the smaller companies in the field. 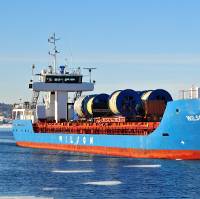 Wilhelmsen Ships Service’s Project Logistics team at Lysaker, Norway has just completed two shipments of heavy duty electrical cable to Belgium, for use in the Belwind offshore energy project in the North Sea off Belgium. The cables were produced in Tonsberg at Parker ScanRope AS, and loaded onto 56 reels. The cable will be used to connect the turbines together. Each reel weighed between 18 - 45 tons, and contained in total 43,722 metres of cable, totalling some 2000 tonnes. Wilhelmsen Ships Service recommended sending these in two shipments, using the same vessel for both journeys.

Ballast Nedam's heavy lift vessel Svanen left the port of Rotterdam last weekend. The Svanen has been commissioned by Van Oord Dredging and Marine Contractors to drive 56 steel piles for the foundations of the Belwind offshore wind farm off the coast of Zeebrugge (Belgium). This is the first phase of the Belwind project, which will eventually encompass a total of 110 wind turbines. Once the project is completed the 110 wind turbines will supply power to approximately 350,000 households, meaning a reduction of 540,000 tonnes of CO2 emissions annually. The offshore wind farm is located on Bligh Bank, a sand bank 46 kilometres from the Belgian coast where the sea has a depth of 15 to 37 meters.

In what would on first appearance be a stupid New Year joke is indeed reality. A tanker carrying 70,000 tons of flammable kerosene, travelling in one of the world’s busiest waterways, inexplicably missed several warning signs and hit a ship dubbed Tricolor, a ship which was sunk with its cargo of 3,000 luxury cars in mid-December in the English Channel following its collision with a containership. In a vast understatement, a British Coast Guard official was quoted by one of the wire services as saying: This accident should not have happened. Really? Warnings of the sunken ship, which is submerged in about 75 ft. of water and apparently visible only at low tide, include half-hour warnings broadcast in the area, fluorescent buoys and a radar beacon.