An operation led by British navy special forces is under way to retake control of an Italian cargo ship off the English coast after stowaways threatened crew members on Friday, the political editor of The Sun newspaper said, Reuters reported.Police said earlier they did not think the incident aboard the Grande Tema in the Thames Estuary - involving four stowaways - was piracy or terrorism related.(Reuters writing by William Schomberg, Editing by James Dalgleish)

Tilbury Port to Capitalise on Opportunities to Boost Trade

Tilbury Port and the people that work there will play a major role in helping the UK to increase international trade after we leave the European Union.International Trade Secretary Dr Liam Fox visited Tilbury Port  to meet with port workers and management, as well as members of the Tilbury on the Thames Trust.Tilbury is the fastest growing port in the UK and a £1 billion investment programme will see the port employing 9,000 people by 2020, 3 times more than it did in 2012. One…

New Pilot Boat for the Thames and Medway 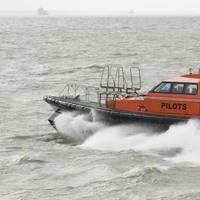 Estuary Services Limited (ESL), a joint venture between the Port of London Authority (PLA) and Peel Ports London Medway, is continuing its fleet replacement plan and buying another new pilot boat for its pilot transfer operations serving the ports of London and Medway. ESL currently has a fleet of six vessels including two 17.1 meter ORC class vessels that carry marine pilots from the Kent coast to board ships, in the Thames Estuary. The ships which are arriving from all over… 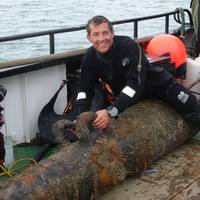 A commercial diver has pleaded guilty at Southampton Crown Court to a fraud offence in excess of £46,000 following a two year investigation by the U.K. Maritime & Coastguard Agency (MCA). The diver, Vincent Woolsgrove of Ramsgate, Kent, reported finding five cannons during the summer 2007, two from the wreck of the warship, London, and three in international waters off the coast of Kent. The cannons recovered from the warship were both very rare bronze Peter Gill and commonwealth cannons. 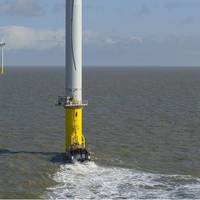 CWind announced that it is has been awarded a contract for the supply of two crew transfer vessels to the London Array offshore wind farm (OWF) supporting operation and maintenance (O&M) activities. London Array OWF is located 20 km off the Kent coast in the outer Thames Estuary. Both workboats, the CWind Alliance and CWind Artimus, will be operating from Ramsgate in Kent. CWind Alliance is very familiar with the site and in 2013 received a recognition by Siemens for its outstanding vessel performance on site. 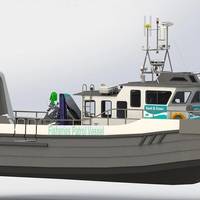 The Kent and Essex Inshore Fisheries and Conservation Authority (KEIFCA) placed a contract for a 17-meter GRP Blyth Workcat for use when monitoring fishing activities around the Kent and Essex coasts. The new boat is being built to meet the exact requirements of KEIFCA which has specified a durable craft capable of operating in extreme offshore conditions while undertaking a wide range of tasks relating to the monitoring of fish stocks and the supervision of fishing activities.

The U.K. Maritime and Coastguard Agency (MCA) announced that at a hearing yesterday the Channel Magistrates Court the owner/skipper of the French fishing vessel, St. Jacques II, was convicted of causing pollution from the Maltese tanker, Gudermes. On the morning of March 23rd last year the St Jacques II was proceeding to fishing grounds off the Thames Estuary from Boulogne. Skipper Loïc Margollé had set a course which took his vessel the wrong way along the South West traffic lane. He then left the vessel in the charge of a young rating, who subsequently fell asleep on watch. In the early hours of the morning the "St Jacques II" collided with the Gudermes, rupturing a cargo tank and spilling oil into the sea. 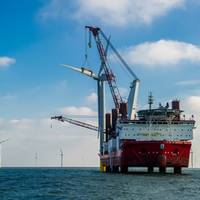 The world's largest offshore wind farm (OWF) London Array has 175 Siemens wind turbines installed. Together with Dong Energy, Siemens will also be responsible for the service of the wind turbines through a long-term agreement. The wind power plant owned, developed and built by a consortium consisting of Dong Energy, E.ON and Masdar has a total capacity of 630 megawatts (MW) and will generate enough power to supply 500,000 British households with clean electricity. This offshore wind farm will reduce annual CO2 emissions by approximately 900…

The Shipowners’ P&I Club is sponsoring the Mark Boyle Memorial Thames Sailing Barge Match which takes place on July 13, 2013 in this its 150th anniversary year. The event is held this year in memory of Captain Mark Boyle, who revived the event in 1995 and organized it each year until his untimely death last year aged 55. The Match was the brainchild of Henry Dodd a wealthy London businessman from humble origins who built his business on waste transportation by sailing-barge from London to refuse works along the river supplying ash for the brick-making industry. He was a good friend of Charles Dickens, who used him as the model for Mr. Boffin, the refuse magnate of the novel, Our Mutual Friend. Custom exhaust systems designed, engineered and manufactured by Manuflex Ltd. in partnership with Centek Industries are providing sound attenuation aboard two fast pilot launches built by Goodchild Marine of the United Kingdom for Estuary Services, Ltd. Both vessels operate from Ramsgate, supporting Thames pilots in the busy Southern North Sea and Thames estuary. Estuary Elan was the first of its innovative design by French Naval Architect Pantocarene to be built in the UK by Goodchild Marine. 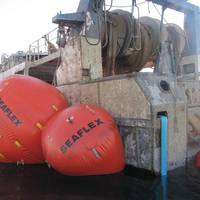 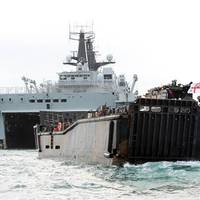 The crew of 'HMS Bulwark' serves as hub in Portland Harbour for the security effort surrounding the Paralympic sailing events. The assault ship serves as the command and control centre for maritime security operations around Portland for the duration of the Paralympic Games. From her operations room, Bulwark directs the movements of Royal Marines raiding craft, patrol boats and civilian launches and boats, fed by live imagery of the waters around Weymouth by special cameras fitted to Fleet Air Arm Merlin helicopters on patrol overhead. 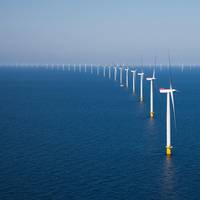 Forewind, in agreement with The Crown Estate has revised the current development potential for the total capacity of the wind energy projects in the Dogger Bank Zone from 9 gigawatts (GW) to 7.2 GW. At the same time, the consortium behind London Array has announced it will not proceed with the development of Phase 2 of the offshore wind farm. The revision has been made following more than four years of offshore and onshore surveys and assessments, which have concluded that the… 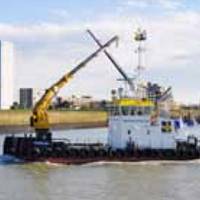 Multraship takes delivery of Multrasalvor 3 built by Damen Shipyards for work offshore UK. Multraship continues to invest in its diverse fleet of towage and salvage vessels to help provide the highest levels of responsive service to the international shipping industry. The company has taken delivery of Multrasalvor 3, a new Multi-Cat 2409 from Damen which is a bigger and better version of their old Multrasalvor, which has now been sold. The new Multi Cat has two cranes, spud-poles, an A-frame and a double-drum winch.

The U.K.'s largest Port Authority has specified a Caterpillar 3056 marine engine to provide propulsion power onboard a new 32-ft. (9.7-m) salvage cutter. The Port of London Authority ordered the new vessel to replace an aging cutter, which has been part of a team of three boats providing support for the authority's two salvage ships Hookness and Crossness since the early 1970s. Being built by Wickham Marine of Colchester using an innovative jig system, which creates a mold in which the steel-hull vessel is built, the boat is open-decked and similar in design to its predecessor. The build method means that the vessel is built from the outside in, i.e. the hull structure is built first, before equipment and systems are installed.

Jotun: Greening the trade in crude

Bringing her first cargo to Europe following completion by Samsung Heavy Industries, the 306,000-dwt British Pioneer has given new expression to environmental-consciousness in the crude oil transportation sector. While the security of her 2.1-million barrel cargo containment has been enhanced by the compulsory double hulling, the non-mandatory continuation of the double shell aft better safeguards the bunker spaces, reducing the risk of fuel oil spillage in the event of the aftship being breached. In addition, her potential impact on marine life has been lessened through the adoption of a newly unveiled, tin-free antifouling. Although it currently comes at a very substantial price-per-liter premium…

Despite a parceling of marine business to the Far East, the British commercial and naval marine construction base has fought to maintain an edge in certain niches. VT Halmatic has been one of the more progressive and aggressive British companies in maintaining a strong hold on commercial and military marine business, with the production of some outstanding boats for pilot, patrol, marine security and naval operations. Noting the 60 to 70 percent of the company's production is for export, Sebastian Freeman, commercial controller, said, "that's how we survive." While the client list is diverse, VT Halmatic's "bread and butter" is the pilot and workboat markets, and despite the fact that the majority of is boats are sent abroad, the Royal Navy is still its biggest customer for RIBs.

Estuary Warden a VT Halmatic Nelson 48/50 pilot boat has recently been delivered back to Estuary Services Ltd following a thorough mid-life refit at VT Halmatic’s Portchester Shipyard. The Pilot Cutter first entered service in 1992 and has been in continuous service ever since in the busy approaches to the Thames Estuary and Medway Ports. The craft was weighed and inclined pre-contract to ensure that design changes would not increase the VCG or change the LCG as Estuary Services Ltd were pleased with the sea keeping and handling of the craft. Weighing and inclining post re-fit confirmed that both all up weight and VCG had been reduced and sea trials confirmed the craft had retained its good sea keeping and handling characteristics.

The UK Marine Accident Investigation Branch (MAIB) issued its report of the investigation of the accident on board the commercial sailing vessel ALBATROS in the Thames Estuary on 22 August 2004 that resulted in the death of a passenger. The passenger requested permission to go aloft. The request was approved by the master. The passenger was given instructions and provided a restraint belt and lifeline, but not an approved safety harness. During the climb, the passenger froze and then fell backwards, striking the port gunwale before falling overboard to his death. The investigation revealed that the sailing vessel lacked a safety management procedure and that the passenger received inadequate briefing and supervision. Report No. 7/2005 (HK Law).