Newbuild Market
Unsurprisingly, across the offshore sectors, newbuild orders have been scarce to none. Oversupply is still a major problem for the industry and due to slippage, ordering vessels now would be counterproductive. Why order brand new vessels from a yard and wait several years for these to be delivered, when you can purchase readily available cheap tonnage direct from the yards ready to go? 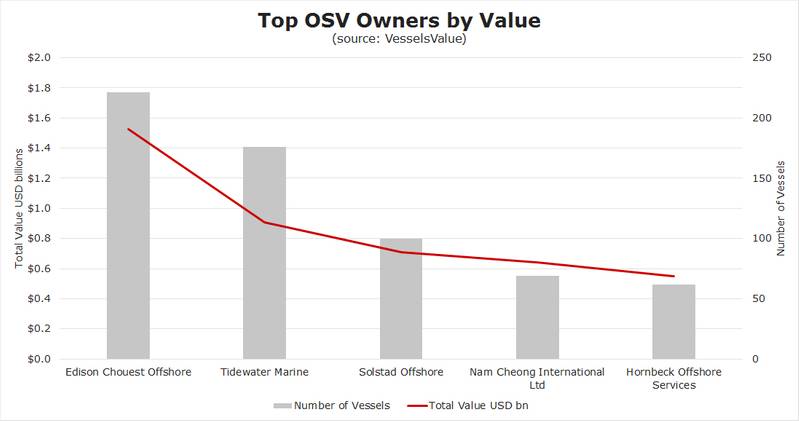 Source: Vessels ValueSale and purchase
It has been a bumper year for sale and purchase activity within the OSV and OCV sectors, with 172 second hand transactions in the OSV sector and 23 in the OCV sector. In the OSV sector, the Toisa bankruptcy process moved into full swing and we saw the market flooded with distressed tonnage. Several companies have managed to acquire good quality vessels at very attractive prices.

The Rig market
In the rig sector, Borr Drilling has been relatively quiet since its purchase of five rigs at the start of May 2018 from Keppel FELS for $144 million. Instead, we saw the emergence of rig operators in the sale and purchase market. Players such as Shelf Drilling and Noble Drilling have taken advantage of the current market conditions and acquired quality tonnage from Chinese yards at attractive prices.
However, not to be outdone, Borr emerged last month almost a year after its last purchase and swooped in on the Thor (ex Hakuryu 15, 400 FT, 2019, Keppel FELS) for $122 million. The rig was contracted to BOT lease in 2014 for USD 240 million. 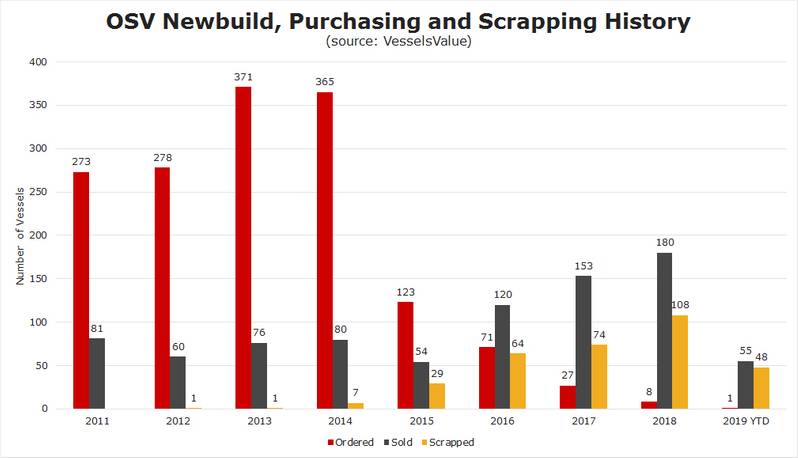 Source: Vessels ValueDemolition
Tidewater continues to set the standard when it comes to scrapping. The OSV giant announced their fleet overhaul plan in 2018, which contained competitive vessel specifications, known as Tier 1, to modernize their fleet. Tier 1 states that PSVs require a deck area of greater than 800 sq. m. and AHTSs need a bollard pull of greater than 80 MT, while both need to be under 10 years old with DP 2 to be competitive.
Between January 2018 and May 2019, Tidewater has scrapped a total of 45 vessels. However, following the merger, non-core tonnage (including ex-GulfMark vessels) has quickly been making its way to the breakers’ yards in 2018 and Q1 2019.