Elaine Maslin is an offshore upstream and renewables focused journalist...

Greater understanding of what goes on in the ocean is starting to become a reality – thanks to growing use of unmanned surface and underwater vehicles and developments in biological sensing.  Elaine Maslin takes a look at what a team at MBARI has been doing.

Gathering biological data from the oceans remains a significant challenge for oceanographers. Now, an increasing range of unmanned vehicles that are able to work together is becoming available, as is an ability to collect biological data using them.

It sounds straight forward, but traditionally the collection and processing of biological samples has involved collecting samples, usually from a research ship, which are then gathered and taken for processing in a laboratory. The result can be patchy or miss significant events.

It’s also been difficult and impractical for underwater vehicles to do, because they’re not big enough to store the number of samples that would be needed or carry the laboratory equipment that could do onboard analysis – until now.

A team at Monterey Bay Aquarium Research Institute (MBARI), based at Moss Landing, California, has been working on a so-called “ecogenomic” sensor solution for over the last 25 years and it’s now been getting results, as part of multi-vehicle missions on and beneath the surface.
Dr. Jim Birch, director of MBARI’s SURF center, says it started with a group interest in microbial oceanography – the study of the smallest organisms in the ocean, including understanding how and why harmful algae blooms form. Dr Birch spoke about the work and its results at the National Oceanography Centre’s Marine Autonomy and Technology Showcase (MATS) event in Southampton, late last year. The result is an Environmental Sample Processor (ESP), a compact robotic system that filters a water sample and then processes the biomass to create analysable samples. 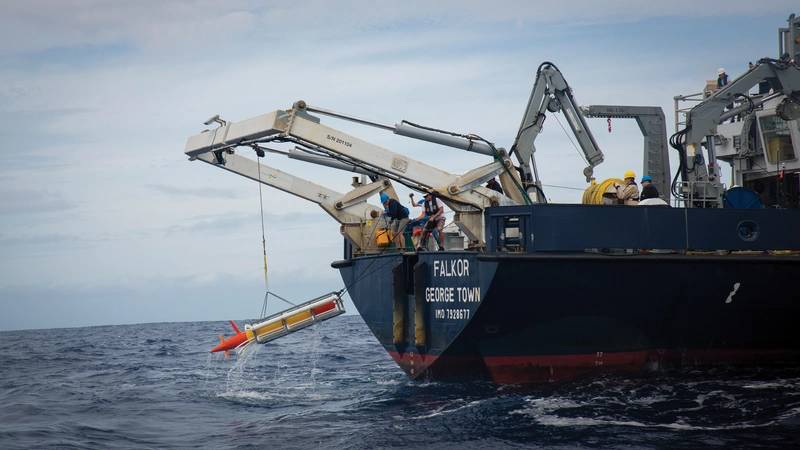 A long-range autonomous underwater vehicle carrying an ESP is recovered to the R/V Falkor after a mission.
Credit: Photo by Thom Hoffman / courtesy of Schmidt Ocean Institute.

The ESP program was started by current MBARI CEO, Chris Scholin when he was a post-doc at MBARI. The goal was to be able to detect harmful algae blooms (HABs) in situ, without having to take samples back to a lab. The first 10 years focused on developing detection chemistries that could identify the harmful algae. But, from the start, “Chris's idea was to forget the samples and put the lab in the ocean, sending only the data back,” says Dr. Birch. “A ‘first generation’ ESP was a beta-type robot that was deployed once in the Gulf of Maine to show that it would work, which it did.”

Then came a Second Generation (2G) ESP, which fits into the size of a 50-gallon drum. One was deployed in about 2006 in Monterey Bay and the design has since been licensed for commercialization to McLane Research Laboratories in Falmouth, Mass. It’s been a “workhorse” for the past 14 years, says Dr Birch.  Both the 1G and 2G ESPs were static robots, moored in the water they are sampling, or installed in areas where water can be automatically pumped to them.

“The ’sample’ that the ESP collects is actually material left behind when you filter a known volume of water,” he explains. Samples can either be preserved for later analysis, or processed by the ESP in-field. Processing requires some molecular biology, and to do that, microorganisms in the samples must be lysed to release their cellular contents. “The ESP uses enzymatic lysis, breaking cells open with heat and a special enzyme and creating a homogenate or lysate that can then be analyzed in a number of ways,” says Dr Birch.

“We saw early-on that mobility could expand the ESP’s potential and began to ask, could we put what was in a 50 gallon drum into the size of two basketballs as an AUV payload?”, says Dr Birch.  It just so happened that, at the time, 5-6 years ago, MBARI was developing a long range AUV (LRAUV) based on a Tethys-class AUV. The result is the ‘third’ generation ESP (3G ESP), with a new ring cartridge design and magnetic push rod plungers. It contains two types of sample cartridges, archival, to preserve and store samples, and the “Lyse-n-go” for infield processing and analysis.

The LRAUV is a propeller driven, 30cm diameter, 2.3 m long (3.2 m with 3G-ESP), 120 kg (160 kg with 3G-ESP) vehicle depth-rated to 300 m. By honing many of the systems related to propulsion, the LRAUV can run 7-14 day missions before needing to be recovered and recharged.  An internal buoyancy engine also permits fine-level depth control, important behaviour when trying to sample the biologically rich thin-layers found throughout the oceans.

This technology was put to the test during a project with the University of Hawaii, who acquired three LRAUVs with ESPs. The goal was to allow greater access to the sea than their ship schedule allowed in order to study the microbial populations that inhabit a Deep Chlorophyll Maximum (DCM – a region ~120m deep with maximum concentrations of chlorophyll).

The culmination of this project was in 2018, when the R/V Falkor (Schmidt Ocean Institute) deployed two MBARI LRAUVs, Aku with a 3G ESP onboard, and Opah with a standard instrument package, along with a Wave Glider, to study a large, mesoscale eddy (~150mi across) north of Oahu. Aku descended to locate the DCM and identify the temperature at the depth of highest chlorophyll fluorescence. By controlling its depth as a function of temperature, Aku was able to stay in the DCM for four days without surfacing.  While drifting, Aku pumped ~1 liter of seawater through each filter stack and then preserve the filtrate with RNA-Later, for future analysis ashore.

Meanwhile, Opah tracked Aku using USBL positioning, keeping Aku at the center of an 800m radius circle, collecting contextual data. Above them a Wave Glider also tracked Aku, and provided position and communications to the R/V Falkor. A drogue with a surface buoy was also launched to track the centre of the eddy. 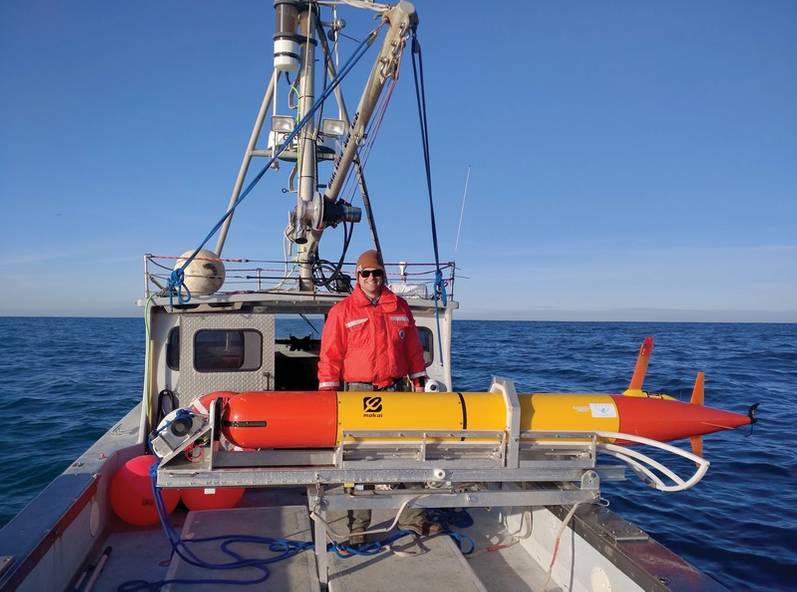 In total, 82 samples were collected, preserved and archived in one-liter increments at three-hour intervals over nine day-night cycles, from within, above or below the DCM.

“The deployment turned out to be wildly successful, with Ed Delong, who is interested in the timing of microbial responses to the environment, able to collect water samples from a drifting, submerged vehicle (i.e., in the same water mass) every four hours over four days,” says Dr Birch. “It produced a remarkable dataset, that he is still in the midst of analyzing.”

In June 2019, MBARI carried out another ESP-vehicle project, this time closer to home in Monterey Bay. This was a large, multi-asset experiment that combined traditional off-the-ship water-sampling methods with a fleet of MBARI LRAUVs, two with ESPs, as well as an i2MAP imaging AUV, one with  a bioluminescence sensor, alongside Wave Gliders, a Sail Drone with an echosounder, and two other research vessels, one with an ROV onboard which was able to gather video data.

All these were deployed over a week in May-June 2019, 37km offshore Moss Landing, around the 900m deep Monterey Accelerated Research System (MARS) cabled observatory, which also has an upward looking sonar system, the Deep Echo-Integrating Marine Observatory System (DEIMOS), to detect marine life and which was able to track the AUVs.

The goal was to look at the diurnal (day-night) zooplankton migration in the bay. Using multiple vehicles meant different layers of the water column at different scales could be studied at the same time. “On this cruise, we were able to collect acoustic, genetic, and bioluminescence data autonomously and video data through ROV Ventana to match with our shipboard CTD and net sampling,” says Postdoctoral Fellow Katie Pitz, who was on the cruise. “It will be exciting to uncover what we’ve learned through these different methods.”

This project has opened exciting possibilities for future research. For instance, because of the ability of DEIMOS to detect layers where sealife congregates, real-time processing of the acoustograms could direct vehicles to areas of interest in near real-time.

“Ultimately, we are working toward moving the processing onto the vehicle itself, to completely remove a human from the process, and get the vehicles to actively search out areas of interest on their own, given parameters humans have provided them at the start of the experiment,” says Dr Birch. “This is the future.”

There’s also more work to be done on the ESP. In-situ sample processing (lysis and analysis) can be done, but the cartridges that perform these processes could be easier to use, says Dr Birch. “We are pushing forward a serious redesign with reliability and usability at the fore-front. Our current efforts are focused on simplicity, reliability, and manufacturability.” Mass producing parts would also help reduce costs and therefore get more people to use this technology. But there’s more to come. “We are developing a remote, autonomous qPCR capability, and exploring the possibility of in situ gene sequencing,” says Birch. That would push the ESP’s capability even further.

These moves would both make the equipment easier to use by other researchers across the world and further increase how much we understand about the ocean.