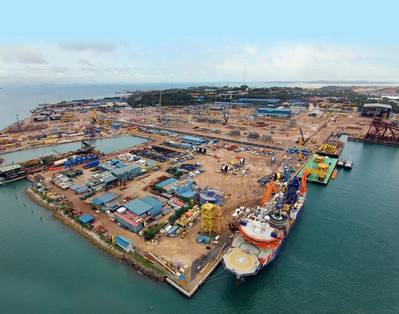 McDermott International, Inc. announced today that one of its subsidiaries has been awarded a fast-track fabrication contract by PC Ketapang II Ltd., a subsidiary of PETRONAS for the BTJT-A Jacket as part of the Bukit Tua Development Project in the Ketapang block of East Java, Indonesia. The contract is included in McDermott’s second quarter 2014 backlog.

McDermott will fabricate the four-leg 1,100-tonne wellhead jacket, from the Batam Island fabrication facility in Indonesia. The project is expected to be complete by mid November 2014.

“The timing of delivery for this fast-track project is critical,” said Hugh Cuthbertson, Vice President and General Manager, Asia Pacific. “We have already commenced fabrication activities as the jacket must be completed for installation before the start of the monsoon season.”

McDermott said it has an extensive track record of delivering project excellence from Batam for the Indonesian energy industry and employs more than 4,500 Indonesian personnel at the facility