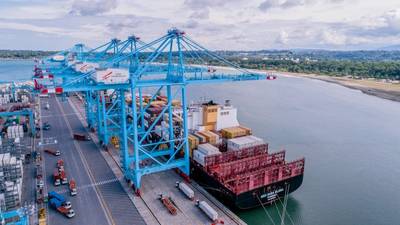 A press release from the international container terminal operating company headquartered in The Hague said that during the year the terminal serviced more than 1,100 ships, around 1.2 million TEUs and achieved important improvements in productivity, sustainability and the training of 1,000 employees from the province of Limón.

“During this time, we’ve reached very important milestones, such as the opening of new direct trade routes, increased port efficiency, the steady improvement of direct services from Limón to China and the attraction of ships with greater capacity,” highlighted Hartmut Goeritz, Managing Director of APM Terminals Moín. “This was all made possible by the execution of our implementation plan and the efforts of all of our employees”

During its first year of operations, APM Terminals Moin has become one of the most productive terminals in Latin America, with performance is comparable to or even better than ports in Europe and the United States. The company has reduced berthing time from 30 hours to just 10, with no waiting times in bay. On average, the Terminal performs 26 moves-per-hour per crane, results that surpass other terminals in Latin America with similar infrastructure and more years of experience.

The next phase of expansion will commence when the MCT reaches an annual volume of 1.5 million TEUs. This is projected to be achieved within a period of 4 to 6 years, as determined by the market.

“APM Terminals is committed to Costa Rica and Latin America because they believe in the value of their location as a strategic point for the import and export of products, such as pineapples, where Costa Rica is a world leader. But, without the expansion of highway 32 and the consequent connections with Panama and Nicaragua, the Terminal alone will not be able to offer all the benefits that the country laid out in their master plan to become a logistical Hub,” said Leo Huisman, Head of Latin America Portfolio.