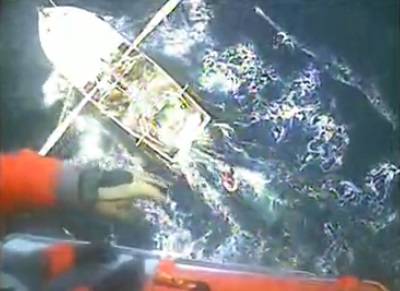 The U.S. Coast Guard announced it medevaced a 49-year-old man at approximately 8 a.m. Monday from a fishing boat about 50 miles offshore from Lewes, Del.

A crewmember aboard the fishing vessel Mary Elizabeth alerted Coast Guard watchstanders of an ailing crewmember who was in need of immediate medical attention.

An MH-65 Dolphin helicopter crew from Coast Guard Air Station Atlantic City hoisted the man and took him to AtlantiCare Regional Medical Center in Atlantic City, where his care was transferred to hospital personnel.

"The crew of the fishing vessel Mary Elizabeth did a great job clearing the deck of the vessel, which aided in the quick deployment of the rescue swimmer onto the vessel to assess the medical condition of the crewmember," said Lt. Cmdr. Ian Stal, a helicopter pilot who flew on the case. "Good communications between the crew of the vessel and the Coast Guard helicopter crew made for a safe hoist and transport of the fisherman."