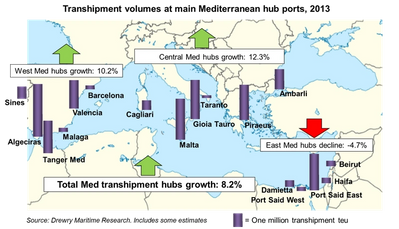 Once all full year data is collated, global container port traffic is likely to have grown by around 3.3% whilst that for the regions bordering the Mediterranean Sea will probably have grown by between 3 and 6%. Transhipment volumes at key Mediterranean hubs surged by an average of over 8%, however, more than twice the global figure, with certain ports showing even more extraordinary growth rates.

Clearly such growth is well beyond organic market growth and whilst there has been recovery in feeder volumes to and from the Black Sea and North Africa for Central Mediterranean hubs, for West Mediterranean hubs much of the growth must be due to increased relay transhipment activity. Carriers have been rationalising their service networks and replacing direct services to and from the likes of West Africa with transhipment from ever larger east-west mother vessels passing through the Mediterranean. In addition, 2013 saw Maersk Line, for example, linking the Mediterranean with the east coast of North America by relaying Med cargo onto its Middle East-east coast North America service.

Linked to this is the significance of critical mass for hub ports. Of the eight ports handling more than one million teu p.a. of transhipment traffic, all but one (Valencia) recorded growth, and all of the growing ports saw volumes increase by more than the market average. Several saw double digit transhipment volume growth (Piraeus, Tanger Med, Gioia Tauro and Ambarli) with Tanger Med topping the list through a near 40% increase. It seems as if increasing vessel sizes and carrier alliances is favouring mega-hubs once again, the last time being before 2006, when the level of hub port efficiency became unacceptable to ocean carriers, prompting the introduction of more direct services.

This was a marked contrast to the sub-one million teu p.a. hubs, most of which were in negative territory in 2013, with the only significant winners being Cagliari and Sines (the latter is not actually in the Mediterranean, but performs a similar role to West Med hubs). Clearly the smaller hubs are suffering from lack of scale, changes in alliance make-ups, as well as specific weaknesses in some cases (e.g. vessel size/draft restrictions in Damietta).

Interestingly, shipping line ownership does not always appear to guarantee activity, as witnessed by the marked decline in Evergreen’s Taranto volumes which have fallen from a peak of over 800,000 teu in 2006 to less than 200,000 teu in 2013. The line’s increasing co-operation with other carriers has clearly resulted in displacement of volumes to other hubs such as Piraeus. On the other hand, the three ports which achieved the highest growth in estimated transhipment traffic in 2013 – Sines (76%), Tanger Med (38%) and Piraeus (19%) – all have direct or indirect links with major carriers. Sines is backed by MSC (through TIL), Tanger Med has CMA CGM (and reportedly an MSC affiliate) and Piraeus has Cosco through ownership of the port’s main terminal by Cosco Pacific.

The geographical spread of transhipment activity within the Med is also significant. The Central Med and West Med sub-regions showed the strongest growth in 2013 with 12.3% and 10.2% respectively, whereas the East Med sub-region saw a decline of nearly 5%. Within the East Med sub-region though it is significant that East Port Said saw 9% growth whereas all the other (much smaller) East Med hub ports saw a decline. East Port Said is home to APM Terminals’ Suez Canal Container Terminal which is by far the largest East Med hub port with over 60% of the sub-region’s volumes.

Drewry's view
Bigger east-west ships and larger alliances are likely to continue to allow key transhipment hub ports in the Mediterranean to outperform underlying organic market growth by serving regions well beyond the Med through relay. The large hubs with critical mass are likely to continue to be the main beneficiaries whilst the smaller hubs will find it harder to compete unless they can find a niche – or a large carrier to back them.