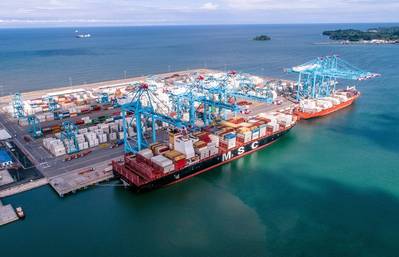 APM Terminals Moín made history when it welcomed the MSC Sara Elena, the largest container ship to ever berth in Costa Rica, measuring 300m long and a capacity of 8,000 TEUs.

In 337 lifts, exports of key Costa Rican exports, included pineapples and bananas, were loaded onto the Sara Elena destined for Rotterdam, the Netherlands. The vessel was in port for just under nine hours, including the obligatory first call celebrations.

This successful call once again validates the opportunity to serve Costa Rica’s economy with larger vessels. APM Terminals Moin has been consistently breaking its own gross moves per hour (GMPH) record, achieving GMPH of 28 in its first half year of operation.

In this first phase, equipped with six Super-Post Panamax cranes and two berths with a draft of 14.5m, the terminal is capable of handling container ships of up to 8,500 TEUs, 24 hours a day, 7 days a week, 365 days per year.

Upon the completion of the project’s final phase, the facility will cover double its current area of 40 hectares, with 5 berths, and be capable of handling vessels of up to 13,000 TEU, the largest size of vessels capable of passing through the Panama Canal locks.