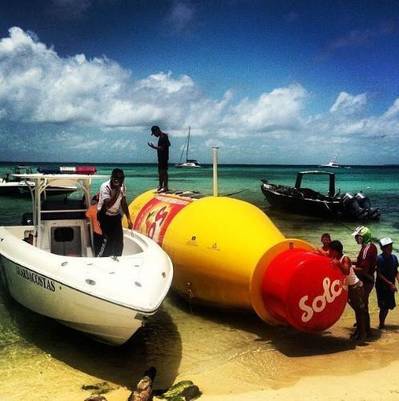 Bottle on the beach: Photo courtesy of Solo/Arjuna Maciel Camargo

In a page straight out of the next Pirates of the Caribbean-script, a well-known promotional campaign involving a 26 feet long message-in-a-bottle, has been robbed by aquatic pirates somewhere east of Barbados.

Solo, a Norwegian soft drink company, released the 2.5 tons replica soda bottle outfitted with solar panels, a camera, and tracking technology to the ocean currents of Tenerife back in March, 2013. Some 145 days later they lost satellite connection with the bottle and the GPS-tracking stopped working. After a series of articles and news segments on the lost bottle in the Caribbean media, to no avail, the future of the project looked dark.

Then Solo discovered, via Twitter, that the Venezuelan Coast Guard had found the bottle drifting in the Los Roques archipelago 100 miles north of the Venezuelan mainland, but the local coast guard informed them that the bottle was totally empty.

Gone was the custom-made camera that took 360 degree images every eight hours, the satellite antenna, and there was a big hole in the bottle itself. Not only did the pirates take the 600 kgs of batteries and computers aboard the bottle, but (unsurprisingly) they also finished off the case of two-dozen Solo drink bottles as well.