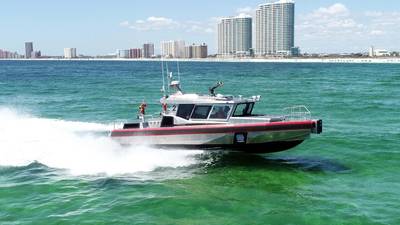 Shipbuilder Metal Shark has introduced the 38 Defiant NXT, described as a next-generation welded aluminum monohull pilothouse model based on the company’s 38 Defiant platform. The first new vessel, “Fire Boat 2,” has been delivered to Orange Beach Fire Rescue in Alabama.

Since 2011, Metal Shark has delivered over 100 legacy model 38 Defiant vessels, in a wide range of configurations to fire departments, law enforcement agencies, the US Coast Guard and Navy, and multiple foreign militaries worldwide.

"As with the previous generation model, the 38 Defiant NXT is also offered in configurations optimized for law enforcement or military use and may be equipped with autonomous capability through Metal Shark’s Sharktech Autonomous Vessels division," the company said.

“Redesigning one of our best-selling models at the peak of its popularity was not a task we approached lightly, but through our efforts we made significant improvements to an already outstanding platform,” said Metal Shark CEO Chris Allard. “Orange Beach Fire Rescue’s new 38 Defiant NXT fireboat and the multiple other fireboats now in production are a direct result of our goal to consistently offer the industry’s most advanced designs through ongoing product evolution.”

According to the shipbuilder, the 38 Defiant NXT boasts a modern arrangement with an innovative new pilothouse design.

Metal Shark said that twin engine-driven Hammond HVAC units provide climate control for "a roomy cabin" equipped with SHOXS 2000 shock-mitigating seating for three, with one seat at each console.

A port-side bench seat with a backrest provides additional seating with latching storage lockers beneath, the company said.

The bow cuddy cabin is accessed via an extra-wide companionway and provides ample dry storage for gear. Fire departments such as Orange Beach Fire Rescue often choose a fully open forward cabin for maximum storage. Alternately, the cuddy may be outfitted with a v-berth, galley, and enclosed head compartment. The 38 Defiant NXT is also offered in an open-bow version, the company added. 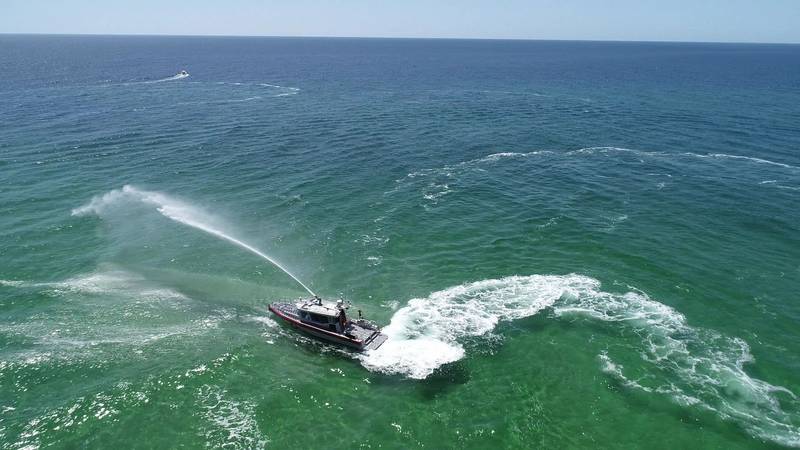 For firefighting, the Orange Beach fireboat delivers a flow rate of 3,000 GPM, with twin 1,500 GPM Darley fire pumps driven via PTO from the main engines. Each pump draws from its own dedicated in-hull sea chest, feeding a central manifold with crossover capability, which in turn supplies the entire system.

“Working closely with our customers and drawing directly from their feedback, we continue to drive change throughout our product portfolio,” said Dean Jones, Metal Shark’s Vice President of Sales for Fire, Law Enforcement, and Specialty Markets. “Today we offer the industry’s most modern lineup of fire rescue vessels, each based on an extensively proven hull. Designed to perform and built to last, Metal Shark fireboats continue to gain popularity among the nation’s leading fire departments.”